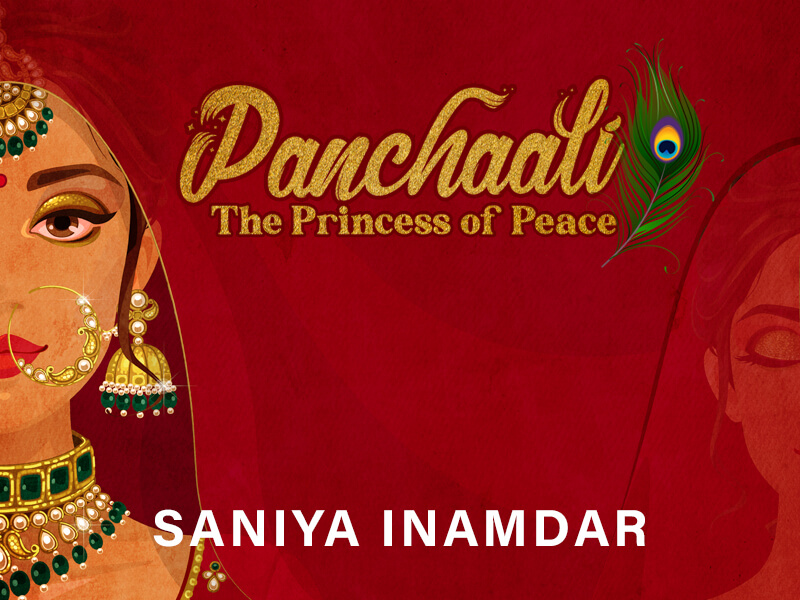 Prologue of Panchaali: The Princess of Peace by Saniya Inamdar

Oh esteemed ones assembled together, I Princess Draupadi with all respect obey not to marry the five illustrious brothers! I agree to marry Prince Arjuna who won my Swayamwara or I will marry no one! There will be a war but Princess Panchaali will have no part in it!

Born as a woman but with no experience of being either a human or a female, the protagonist of the book finds herself in constant struggle, a quest to understand and be understood. The story witnesses the emergence of the naïve Draupadi into a complex world, complex due to her sudden commingling with the new earthly element, a puzzle because of the newness of her matrix, the suddenness of her birth and as she tries to understand the sense of her birth and life she finds a friend, an erudite guide and a sagacious panacea to all her woes and questions, her SAKHA, KRISHNA.

As she travels in this new element with her Sakha she tries to adapt herself as a daughter, a princess, a sister, a friend, a lover and a wife but not as a wife to five husbands! She challenges and questions and sees through the deception and denies to her being a common wife to five husbands, five brothers!

The storyline of the proposed book traces the life of Draupadi in a different light altogether. All the characters are exactly the same as in the original Mahabharata, the story too follows the sequence of the Mahabharata except that Draupadi in the story ‘Refuses to Marry the five Pandava brothers, she declines to be a common wife to five princes, five brothers’

Why did Draupadi refuse such a glorious, powerful and seemingly propitious marriage with the Pandavas? Wasn’t her birth a fulfillment of a wounded heart for revenge? Was she aware of her purpose in life, if yes why did she take such a bold decision of not marrying the Pandavas? Was she against marrying the five princes as they were brothers, was it her love for Arjuna, were there conspiracies by people unknown to her or was she being guided by a force beyond human understanding?

The story traces the journey of Draupadi, a woman so fiercely aware of the sanctity of a woman, her womanhood that she refuses the most powerful, the most loved, the most revered to carve her own niche in society. Draupadi in the story refuses war and embraces peace. The story tries to regale a different alternative of Draupadi’s life.

Draupadi is also portrayed as an ambassador of peace unlike the vindictive and war mongering Draupadi portrayed in mythology! She seems a princess genuinely concerned about the innocent people of Panchaal as she argues with the acrimonious intents of her father, King Drupad!

Sound, it seems rhythmic and echoic! Or maybe the repetition makes it an echo! And then with the sound I emerged out of myself! I did not know from where I defined these sounds; I did not even know what sound was, and yet I could discern it and the words! I found myself for the first time as I discovered the music! It was warm and there was immense light and as I tried to even know myself I felt a touch, and then a nudge, inadvertently I opened up my hand and lo I felt a grasp, a strong stubborn grasp that held my hand firmly and pulled me!
And then a new sense, something disturbed me and I blinked and it was a vision! I saw, I could see, but it was not clear, there was a thin layer of something which made things hazy! I sensed something else too, although I had no name to give it, it was invigorating and something burning, a marriage of mud and fire with incense! Things became lucid and apparent however as I instinctively followed somebody!

It was perplexing and taxing, as it was interesting!
Someone had invented me, and now I had the onerous task of discovering myself and the world around me!
How could I explain my origin to anyone at that time, I hardly could understand myself!
The quest to explore myself was as difficult to understand the environment I was in! And yet my intrinsic senses helped me understand my matrix! I could hear, I could see, I could feel and I could breathe my world around me!
It would be a little later that I would use my fifth sense, before I would speak! Speak my mind!

In my state of awakened consciousness, I traced my life journey as I relived it! The first memory of me with myself was when I heard the chants of the priests from the sacrificial fire. I recall vividly that it was the rhythmic verses that took me into the realm of consciousness! As I tried to appreciate the newness of the sound, my twin brother Drishtadyumna awakened new doors of vision by taking my hand in his firm grasp and pulling me out to a world which seemed covered in layers of ambiguous smoke! I preened stubbornly like a child through the haze and found a whole unknown world awaiting my emergence! Their eyes reflected my emotions, bewilderment and amazement! I too was caught in the many faces that portrayed emotions as varied as the people and the elements of my alternative world! It smelled of sweetness and surprisingly of burning acridity, two extremes mingling to create a unique cornucopia of environment and also divine twins! And then I spoke the language of the people and learned when not to speak but understand the kinesics, the hidden language of my people! My father, my mother, my brothers and the people in my world except for Krishna! With him there were no barriers no emotional jargon! He made me understand the language of my heart!

Nay it was the sweet dulcet music of the flute which awakened me, it was Krishna’s hand that bought me out in this world, it was his aura, his brilliance that made me blink and then made the world a clear place to see and behold! His effulgence guided me to see the world in all its clarity! I smelled friendship and honesty as ambrosial as the pure mud he took me out into! And I could speak as I spoke to nobody else, he was my alter ego! There was another sense that he gifted me, love, to love thyself was and should be the highest sense in a woman!