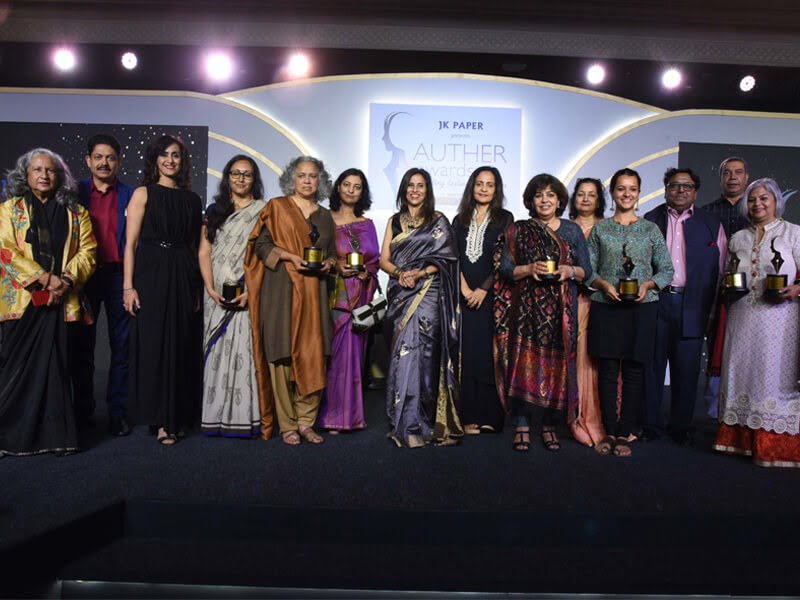 It was an exhilarating evening at Taj Palace, New Delhi that saw a heart-warming celebration of women on Women’s Day. Times of India and JK Papers joined hands to celebrate women authors who have added value and creativity to the literary space. The AutHer Awards 2020 was attended by the who’s who of the town and the hall jam packed with authors, academicians, publishers, bureaucrats, politicians, artists and book lovers, cheering at the winners was a sight to behold.

The awards were handed over in 4 categories and consisted of a trophy and cash prize worth Rs 1 lakh each. There was a Lifetime Achievement award and a Popular choice award too.

In the category Fiction the award went to Madhuri Vijay for her book, The Far Filed (Harper Collins Publishers India)-(Literary Fiction) and Sutapa Basu for The Curse of Nader Shah (Readomania)- (Historical Fiction).

The award was given to Rudrakshi posthumously who passed away at the young age of 16. It was an emotional moment for the entire gathering when her parents Debasree Bhattacharjee and Ratnadip Bhattacharjee received the prize on her behalf and said how happy and incredulous she would have been to receive it.

Bijal Vachharajani was given the Best Author Children’s award for her book A Cloud called Bhura (Speaking Tiger).

Times Group CEO Raj Jain who graced the occasion with his presence, emphasised on the need of focussing on the contribution of women and said, “Since times immoral women have always played an integral role in all aspects of life and indeed have been at the forefront of the creation and origin of existence. Sadly though, they have always been praised out of fringes and have never been a part of the mainstream social and historical narrative.”

The journey of the awards

The books were chosen, post multiple layers of screening, out of a whopping 850 entries submitted by both publishers and individual authors for the coveted national award, the first of its kind in India. The jury considered books by women published in India between December 2018 and November 2019.

Eminent writer and politician Shashi Tharoor who was the Chief Guest of the event, said: ” Of course, things have changed very much, but the fact fundamentally remains that too much of our history, too many of our stories have been written simply by men and if you look at the global picture, the vast, vast majority of published writings have not just been written by men but by white men. Therefore the literate public have looked at the world or have been shaped and conditioned by perspectives of these men.”

Vinita Dawra Nangia, Literary Director, AutHer Awards beautifully summed up the need for having a special award for women authors, “Why should there be an award for women authors? This is to encourage them and recognise their talent because men still seem to have a disproportionate advantage in the field of publishing. It was 174 years ago that Bronte Sisters wrote under the pseudonym of a man because it was felt women writing fiction would not be acceptable in men and although a lot has changed after that, but women continue to use pseudonyms and initials and men dominate the bestselling lists. We need to change all that.”

The AutHer Awards was hosted by popular stand-up comedian Papa CJ who interspersed his conversation with humorous anecdotes and added a lively nuance to the gala evening.