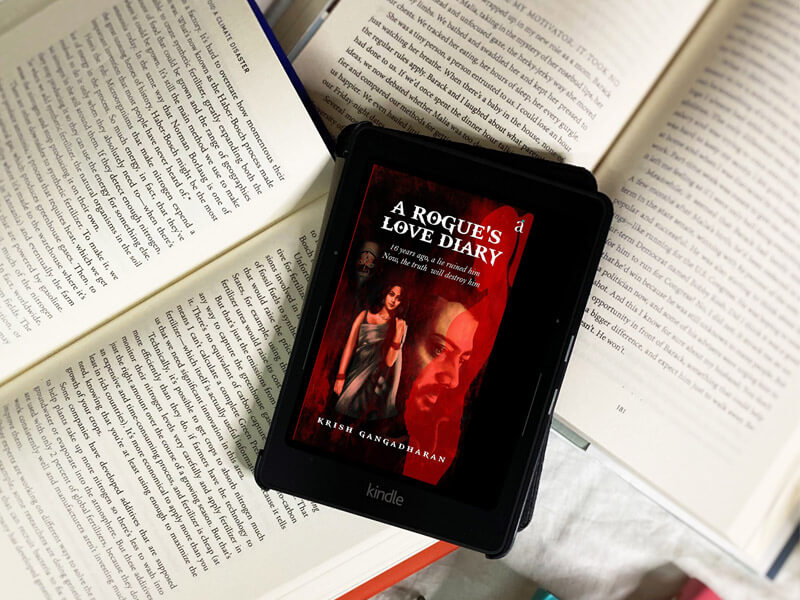 The son of docile, orthodox, middle-class parents, and the grandson of a holy priest, Chandru did not lead the life that was expected of him, nor was he meant for the end that loomed large. Sixteen years ago, he was a University topper, a champion chess player, an expert swimmer, and a Bravery Award recipient.

But all that had been frittered away in hurt, grief, anger, jealousy, and debauchery. A spurned love had turned him into a selfish, deceitful, immoral and ruthless rogue. He connived his way to money, success, sex, and a marriage, only to lose everything in his chosen path of self-destruction.

In the ending, will the beginning lie?

In classic archetypical heroic way, Chandru is but a rollercoaster: a university topper, good son of middle class parents turned a drug abuser, street mongrel. Love is something that made him into the hollow human he was. It all bloomed infront of him, love, life, sex, success, all of it and then one wrong step and all is gone is an act of rushful betrayal of self.

Now released after spending 10 years in prison in charge of attempted manslaughter, a fruit of his careless path of self destruction he was on, Chandru needs to find redemption. His past doesn’t leave him easily, nor does love, nor does it’s want, but he needs to take the harsh path. Will be succeed?

Characterization is one of the strong points in the book. Each character is very well portrayed and though with flaws, are praiseworthy. Chandru as a protagonist though did not impress him with his ways, his characterization is strikingly real. The plot as a whole is very meticulously planned and thus thrilling and fast paced which is something that hooked me to the book.

YOU MAY ALSO LIKE: Book review of A Stick in the Dirt by Vidit Uppal

Something that struck to me as a bone of contention during the reading was the fact that at parts the toxicity of the protagonist’s relationship and real love is so mixed up and one can just easily swap both in the prose and that effectively speaking can cause the most absurd of moments. Most of this also adds up to the issue of abusive language and the author’s confusion in telling the taxonomies of toxic love often rendering the text to more bizzare.

Chandru by most means felt like a overtly obnoxious character to me, as lust and love both did not even keep a balance and just started randomly and abruptly running around. Lust is not the same as love, that too is something that the book is often unable to point a fine line on, to clarify and signify between both even when the whole book’s genesis is the exact same topic.

How did you like the book review of A Rogue’s Love Diary. Let me know in the comment section…