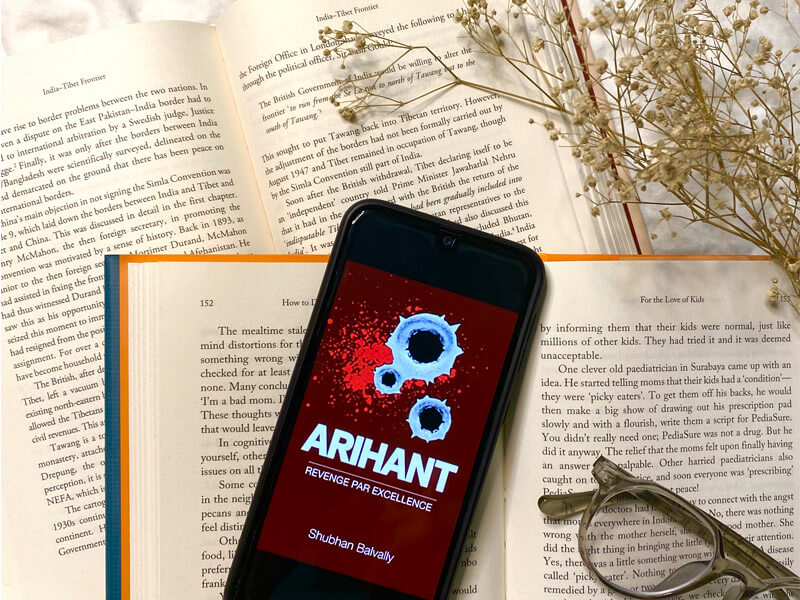 an award-winning scientist announces the launch of his latest invention, but does not mention what it is. Rival capitalists in the guise of businessmen hunt down the scientist, kill him and destroy his laboratory before he can actually destroy the invention. Suddenly, a killing spree begins across the city. An officer is sent down to investigate on the case, and an intense web of plot twists and secrets surface in the course of Arihant: Revenge Par Excellence.

To give you a glimpse of thrilling this book is – an award-winning scientist announces the launch of his latest invention, but does not mention what it is. Rival capitalists in the guise of businessmen hunt down the scientist, kill him and destroy his laboratory before he can actually destroy the invention. Suddenly, a killing spree begins across the city. An officer is sent down to investigate on the case, and an intense web of plot twists and secrets surface in the course of Arihant: Revenge Par Excellence. Yes, it is the typical crime mystery novel, but with a dash of science fiction and fantasy to turn it into a gripping book. In fact, what impressed me the most was how well-written the plot is. The first chapter of Arihant: Revenge Par Excellence can singularly summarise the kind of thrill, action and suspense we can expect from the entire novel. After I was done reading chapter 1, I was sure Arihant: Revenge Par Excellence will not disappoint me, and it did not. With fantastic action sequences, engaging face-offs and a shocking plot twist, Arihant: Revenge Par Excellence culminates into becoming such a spectacular book.

YOU MAY ALSO LIKE: Book review: Sankat Mochan | Ashish Pandya

Another reason why I loved reading it was the characterisation. The two main characters in the novel have been made into concrete figures with a separate backstory, although I felt that the character of Arihant could have had more space for narrating his origin story in the book. Also, speaking of how well-written it is, Arihant: Revenge Par Excellence is a story that has been very patiently conceived. I made this assumption based on the fact that the book devotes more than ample amount of space to provide a detailed study of the every single incident that populates the narrative. This means, the readers are never deserted by the narrative structure of the book, and that is one of the biggest redeeming features of Arihant: Revenge Par Excellence. Such precision in story-writing, characterisation, and language are barely seen in unison.

I enjoyed reading Arihant: Revenge Par Excellence through and through. And, I would definitely recommend it to those who devour superhero stories in comics and cinema.

5 Books to read if you liked reading the book review of Arihant: Revenge Par Excellence by Shubhan Balvally

Pick the book if

Skip the book if

Shubhan Balvally: It has been the most wonderful 34 years of being associated with Audio & Visual medium. A journey that has taken me through Feature Films, Documentaries, Audio Visuals, Television Commercials, Music Videos and learning the Fine Art of Production, Post Production, Cinematography, Direction in Mumbai, India. I started my journey with Feature Films in Bollywood, way back in 1987 (GURU DUTT FILMS PVT LTD, as an Assistant Director and Editor) and then gradually shifted and settled down in the Advertising World, as an Agency Producer working closely with the Creative Team on numerous Brands. I was responsible for supervising and overseeing many commercials that were shot and post-produced by various Ad-Film makers. I have worked in agencies like CLARION BATES, R.K SWAMY/BBDO, CHAITRA LEO-BURNETT, and LINTAS . In EVEREST ADVERTISING, I was heading their Films Department.. During my long tenure, I produced and directed Ad film commercials. I also dubbed for various commercials in these times. And lastly, I was with an agency known as WILLIAMS LEA TAG as a Films Consultant, single handedly managing the production and post production of all their commercials from Mumbai.

I would like to narrate an interesting tale which happened with me many years back in the year 1983, when I was writing my English exam paper for the 10th Grade/Standard Prelims Exam. And I had to write an Essay titled “AUTOBIOGRAPHY OF A RUSTY OLD SWORD”. I don’t know what possessed me, but I wrote an interesting story about how that Sword was possessed by the great king Tipu Sultan and how he fought many wars with it, then the sword was lost and fell into the ocean where a huge mammoth whale swallowed it up and then how a bunch of giant Stingrays attacked the whale and tore it up and the sword sank into the depths of the ocean and then a deep sea diver discovered it on the ocean floor…so on and so forth!….When I got the results, I had gotten full marks for that Essay!! I was happy, my parents were happy, we forgot about it and life moved on.Fast forward to the year 2007, I re-discovered that same passion for writing and gradually ARIHANT was born! And eventually by 2021, THE ARIHANT TRILOGY was published on AMAZON KINDLE. I was fortunate enough to have received rave reviews for my Story, its sequel and the threequel. I connected these two different incidents from two different eras of my life and that’s when I realised that I was born to be a writer!

And this pushed me to continue my journey as a writer, where I always strive to write stories that have never been heard before and also make them entertaining, maintaining a good sensibility. People should have a great feeling after they have read my stories. Just like when people come out of a theatre, extremely happy and thrilled, after watching a good movie and I have even seen and heard some of the locals announce openly, “KYA BAAP ISHTORY HAI!!” 🙂

And so, this passion still continues to push me and challenge me to explore new horizons.

How did you like the book review of Arihant: Revenge Par Excellence by Shubhan Balvally. Let me know in the comment section…