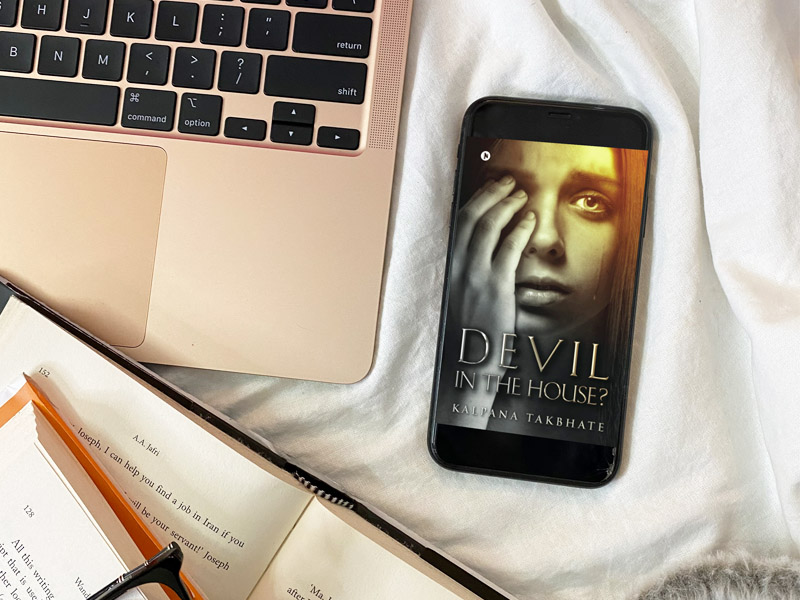 Devil In The House

The murder of her sister brings Mehak back to her hometown. As she returns, she gets hold of a book that Sarah wrote before dying. The book hits some untouched wires in her brain hard, and soon the line between reality and nightmares blurs.

She realizes that returning to the city was a mistake. Sarah had some secrets that, if spilt out, would threaten her peaceful life.

Indeed, what true lines!! We are nothing but both God as well as a manifestation of the devil in our best and worst times in life alternately. Funny are the ways of God who has fashioned us in a manner to depict both the worst and the best together. Albeit he has surely left upon us the choice of becoming and unbecoming the desired version we choose to in this life.

A suspense, thriller this book Devil In The House sure had me fastened to the edge of my seat right from the very beginning. Be it Mehak’s nightmarish visions (apologies, no more spoilers promise peeps) or Divij’s strange secret agendas, this one is one labyrinthine ride which shall keep you riveted till the very end.

The story unfolds with the piece of data that both sisters Mehak and Sarah have been estranged and been out of contact for 2 years. Later on, next to the day all 3 of them have united, Divij and Mehak find out that Sarah is no more and this could be a murder. Herein, sets a tale of mystery, twisted surprises, some predictable, some unnerving. What follows is a myriad of twisters, some emotional, a bit of a super natural facet created, as well as a load of suspense and thrill.

Her plot being racy, Kalpana has managed to not only keep the element of chills and thrills throughout the book but has also paid attention to the core idea being believable as well as relatable. Both the elemental factors of “Who Dunnit?” to “Motive to Murder” have been subtly, yet surreptitiously explored in this narrative.

The build up of the characters, their depiction, the character sketching especially of Mehak and Divij makes you feel as if you are actually alongside experiencing their trauma. In fact, many a times I almost felt the feeling that I was hurtling through an uncanny suspense similar to the thriller movies I have seen.

ALSO READ: Book review of The Search by Sajita Nair

Trying to draw a parallel between the dark, uncertain reality as well the stranger than fiction facets, the story revolves around the 3 pivotal characters while coyly musing over what has transpired actually and what is being portrayed.

The language though simple is sharp, lucid and the narrative is fast paced, even getting surreal at some points. Kalpana tries to create both terror as well as unbelievable suspense whilst moving forward on this stellar plot line which is racy as well as unusual.

If you are a fan of suspense especially mystery and suspense then this book Devil In The House just might be one of the titles to look out for. What with its freshness, a subtle yet unique treatment of the story line and the superb build up of the primary characters, this is a title worth reading and indulging in.

The greatest trick the devil ever pulled was convincing the world he didn’t exist.

Indeed, in this book you shall be thwarted till the end as to who is the one to commit the crime and why has it been executed. A Good attempt by the Author which I believe is her first attempt at writing. Looking forward to her next which I am sure will be even more superb and polished.