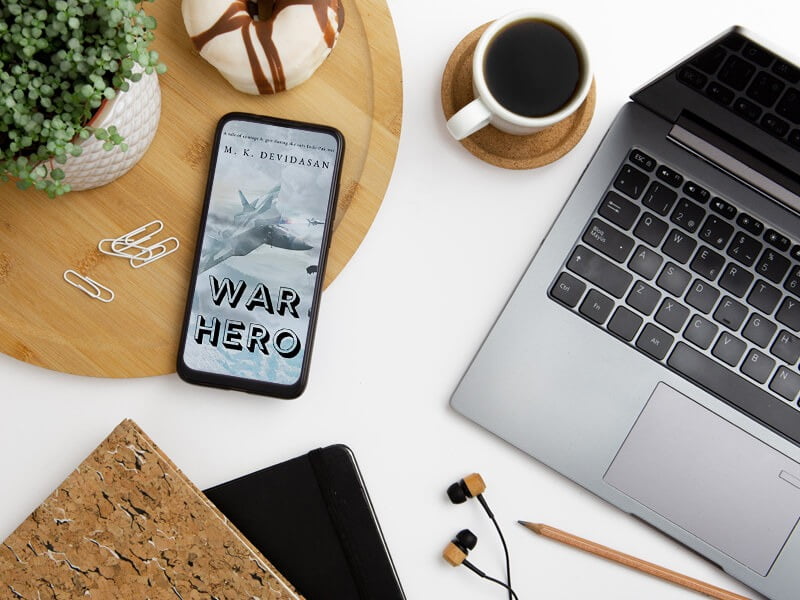 War. What happens in a war? How is it for the soldiers fighting in the war? These questions cross our mind the moment we say the word, ‘War’. The book, War Hero by Retired Wing Commander M.K Devidasan is the answer to all your recurring questions.

So, what’s the book about?

It is a story of Flight Lieutenant Prabhakar of the Indian Air Force during the Indo-Pak War of 1971. While carrying out a mission, his plane catches fire and he has to land in the enemy territory. The mere thought of this gives us shudders, doesn’t it? What happens with Prabhakar that is altogether unimaginable. Captured by the enemy, tortured mercilessly, escaping from the bunker, his trek back to India and then facing problems back home, this book is an untold depiction of what our soldiers face in times of war.

The thing that I most admired in the book was the character of Prabhakar. The calmness and the control of his own mind throughout the story is something to be commended. He crossed every hurdle, be it torture or hunger or anything else with equal determination and calm. How he planned and achieved his goals, his struggles for survival, all of it shows his will power to return to his loved ones. Prabhakar is a powerful depiction of our soldiers with their undying love for their country. How hard they work for protecting us. How hard their minds work to overcome problems we can only imagine. The book gives an untold insight into the Air Force and its working.

I loved the storyline and how it was presented. The narration was good; I could see the story in front of my eyes. Character presentation was excellent. The book would have done better if it was edited properly as there were many grammatical errors.

One thing that can be said for sure about this book is, it will instil a sense of pride for your country and its soldiers in you.

Can’t wait to read this magical book? Buy your copy of War Hero using the link below

How did you like my book review of War Hero by Wing Commander M K Devidasan? Let me know in the comments section

10 Misheard song lyrics that are way too hilarious