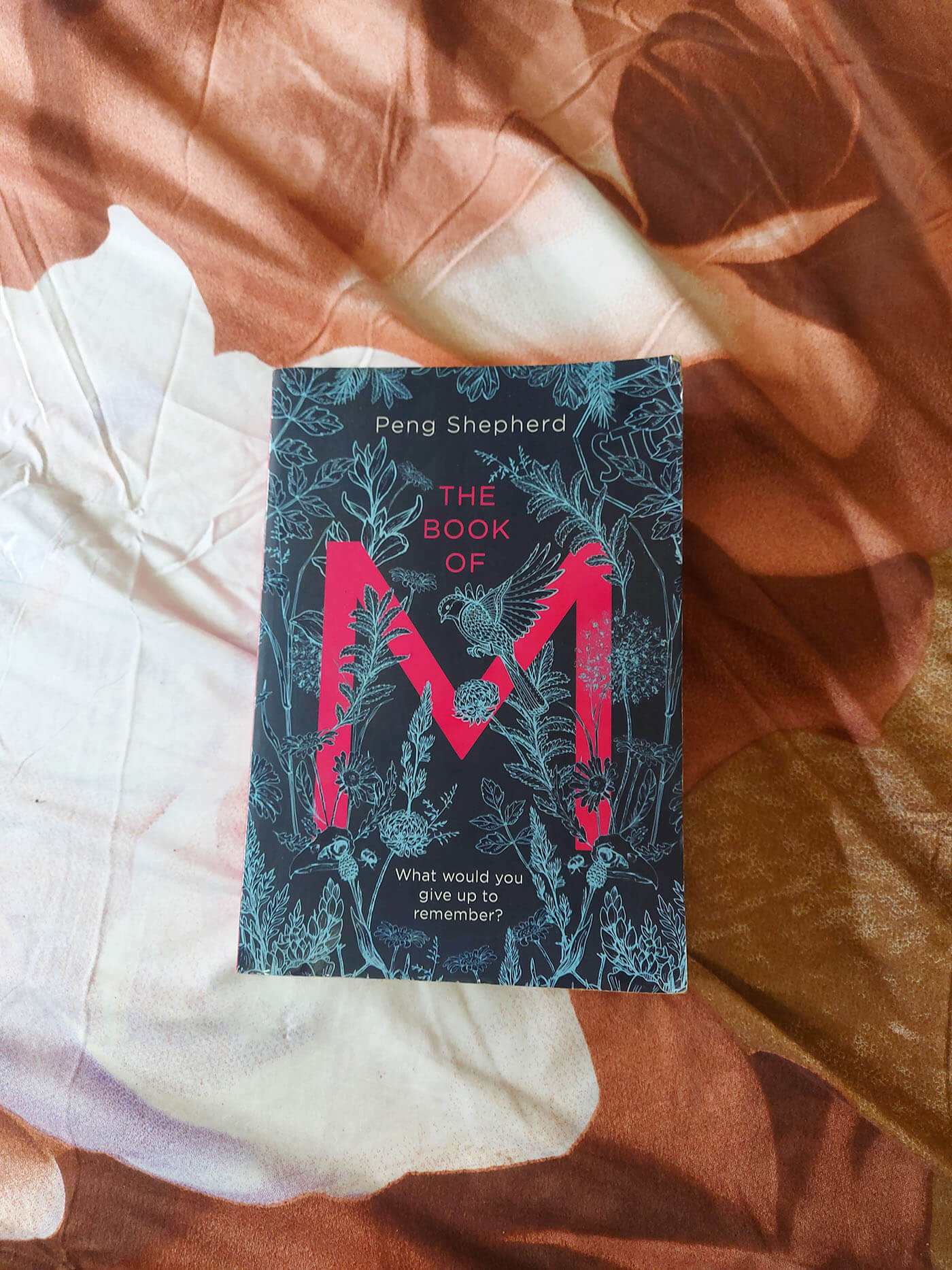 The Book of M by Peng Shepherd

In the middle of a market in India, a man’s shadow disappears. As rolling twenty-four-hour news coverage tries to explain the event, more cases are discovered. The phenomenon spreads like a plague as people learn the true cost of their lost part: their memories.

Two years later, Ory and his wife Max have escaped ‘the Forgetting’ by hiding in an abandoned hotel deep in the woods in Virgina. They have settled into their new reality, until Max, too, loses her shadow.

Knowing the more she forgets, the more dangerous she will become to the person most precious to her, Max runs away. But Ory refuses to give up what little time they have left before she loses her memory completely and desperately follows her trail.

On their separate journeys, each searches for answers: for Ory, about love, about survival, about hope; and for Max, about a mysterious new force growing in the south that may hold the cure. But neither could have guessed at what you gain when you lose your shadow: the power of magic.

A breathtakingly imaginative, timeless story that explores fundamental questions about memory and love—the price of forgetting, the power of connection and what it means to be human when your world is turned upside down.

An up-close, candid account of the impactful book called ‘The Book of M’ – How our memories are not only essential but form the entire basis of our life thread…

As Macaulay Culkin aptly puts it-

I am a collection of thoughts and memories and likes and dislikes. I am the things that have happened to me and the sum of everything I’ve ever done.

Indeed, true nostalgia is an ephemeral composition of disjointed memories as Florence King has rightly put. What and how we live through, the sweet-bitter nothings we are a part of, the successes, the failures, the joys and the agonies all form a part of and constitute the totality called us aka it shapes the being of who we are and where we stand today.

Memories have huge staying power but like dreams they thrive in the dark, surviving for decades in the deep waters of our minds like shipwrecks in the sea bed. But what if they cease to exist one fine day? Will we still be what we are-the sum total of all that we have experienced in the past?

Writer Peng Shepherd through the highly accoladed book of hers The Book Of M chooses to explore this loss of memories via an ensemble of the most vivid and unique trail of incidents which comprise of people losing their shadows as a part of a catastrophic pandemic and subsequently their memories leading to fatalities. The intimidating manner in which she has captured and portrayed this hypothetical scenario is overwhelming as well as mind-bending, leaving you thunderstruck, gasping for a want of better judgement as the events unfurl one by one.

The story follows four primary characters namely Orlando Zhang, his wife Max, an unnamed character referred to as “the Amnesiac” and Mahnaz Ahmadi who is an Olympic level archer. When they are off to an island to celebrate the wedding of a friend, little do they realize that they shall be stranded when a catastrophic pandemic of biblical proportions sweeps through the globe, causing people to lose their shadows first eventually losing out their memories and the power of staying alive with sanity and sanctity. What ensues is something that is as spooky as it is mayhem. As Peng has put it through her words What if the makers forget to make? What if the shadowless forget their names, their history, forget everything of their existence? Big Mess huh!

Peng has taken inspiration for this work from the Zero Shadow Day or the day when the Sun does not cast a shadow of an object when it is at its Zenith position. Not only do science enthusiasts but spiritualists too revel in the mythical mesmerizing phenomenon which takes place twice a year.

This being an established scientific incident, Peng has artfully used this in a futuristic dystopian concept where she has mused and portrayed in detail the complete ergonomics and the important memories hold in our lives. According to her, we are more than the collection of our memories. It is the events in those memories that help shape who we are, but nevertheless, who we are is a living thing, not a construct exactly.

Generally, in post-apocalyptic, dystopian fiction what we usually come across is alien invasions, technology has gone awry, virus attacks, vague space-time ergonomics, interstellar stuff and so on. However, to encapsulate something so mystical, magical such as a loss of a shadow creating a life-threatening condition, eventually leading to a pandemonium was absolutely a gob smacker for me.

The entire core idea being fascinating is also immensely creative. The bits of research Peng uses to back up her plot, the surmises are by themselves a thread to lead you forth onto the path of mysticism she has created, mesmerizing you with a fine blend of facts and fiction. Take for instance the dictum- An elephant never forgets. Indeed, to not give away any spoilers of the story, we see that the entire continuum of the core eventually proceeds with the fact that indeed, the elephant form “never” forgets.

The phrase which Ory and Max refer to “Blue, Fifty Two” has simply stuck with me, keeping me emotionally riveted, as if on a rigmarole stuck between space and time, in an alternate universe, a universe where I sincerely feel the pain of Ory, the helplessness of Max, vying against hope for them to be reunited. The whole concept of one losing themself, there being all together is fascinating, awe-inspiring as well as terrifying at the same time. This is surely a fiction of another level altogether I’d say.

A great book where science fiction meets fantasy in a mythical marriage and the characters have been penned down so well that one cannot help but simply flow on. Enthralled in this chasm she has created.

So that was my review of The Book of M by Peng Shepherd which is a unique, awe-inspiring, fantasy meets sci-fi kinda read. Hope you enjoyed reading it.

Do let us know what other books you would like us to read and review. Do tune in for our recommendations and the latest from the field of entertainment, lifestyle, travel and all things bookish.