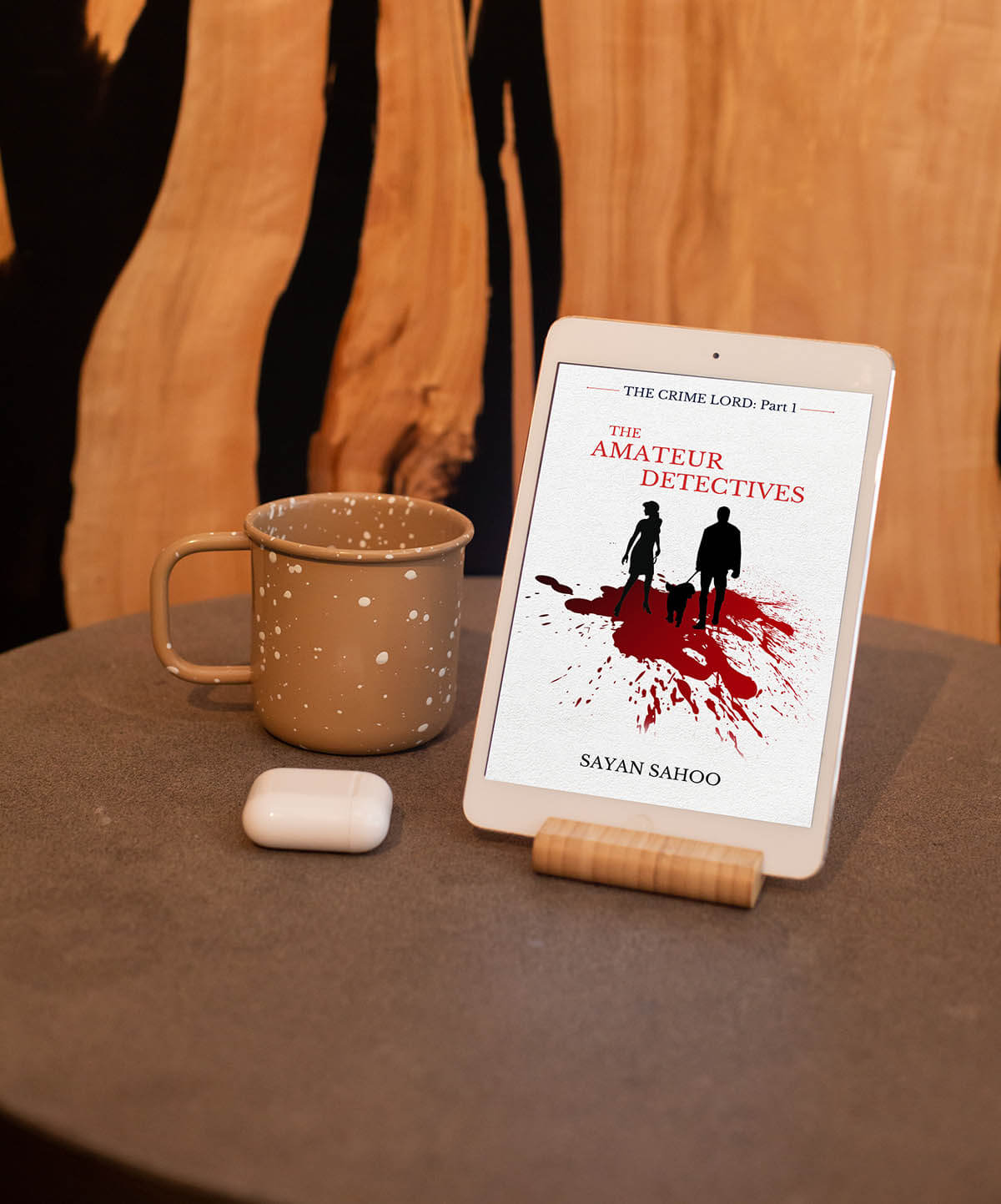 Do you enjoy reading Sherlock Holmes and Feluda? Come read this book review of The Amateur Detectives by Sayan Sahoo to discover the brand new detective on the block.

When chaos & crime run rampant,
Comes He, neither a Hero nor the Villain;
He is Karma! He is the Crime Lord!

The Crime lord, a myth, an immortal man, someone who was believed to be running his own justice system in India once and whose last strike was in the 1970s, is rumoured to have returned in the current year of 2020.

On one hand, there’s him, while on the other, there is the detective trio – Neel Kumar Roy, his lazy English Bulldog Jimmy, and martial-arts champ Dipti Dutta. They gain fame solving crimes, and their newly found popularity takes them to Mumbai at the same time when the devotees of the Crime Lord wreak havoc in the city.

Who is the Crime Lord? What is the fate of the detectives? While these questions are left unanswered, the dead people whisper of the gruesome fate the SINNERS will be rewarded with, for the Karma on flesh has returned. And he’s hungry as ever.

The greatest crimes in the world are not committed by people breaking the rules but by people following the rules.” It’s people who follow orders that drop bombs and massacre villages.

Indeed, crime is a very fascinating genre. If written and created correctly, it is one of those that can entice maximum audiences towards it owing to its ability to keep one glued and hooked on to the story, mulling over the outcome of their transpiring. Over the years, I have read many thrillers. Hence, I can tell which is a great one when I see it. By reading a part of the initial story itself, I can surmise how well it bakes and develops. And I feel a racy read, which sends chills down your spine, always has the ability to quickly overstep other reads, becoming one’s go-to amongst other options. And this book was one of those reads for me.

I generally avoid reading prologues as they usually, for me, do not add anything to the story. I feel they are simply a waste of time. But here it was poetic, unique and different. Leaving you with an anticipating build-up, it set the tone just right for me first. And I simply fell in love. The prologue exuded a vibe akin to dark noir, something I find absolutely alluring. It was as if the writer told you, in a tantalizing tone, “Beware, a storm is coming your way. Prepare to be blown away!! “

With a tantalizing prologue already on the cards, Bam! Enter Neel Roy, the main protagonist, whom I fell in love with. And it rarely happens that I fall in love at first sight with the characters. As I usually do not see one character or their group but all the elements. But with The Amateur Detectives by Sayan Sahoo, it was the first time in a long time that I fell for a character so hard. Neel Roy, a person whose mere mention brings a smile to my face. An affable character, this guy absolutely swept me off my feet. In awe of this guy! Sigh. A persona with whom anyone will fall in love with certainty. One who has yet to master his education but does not consider himself any less than masters such as Sherlock Holmes and Feluda.

Remember how we used to love Hercule Poirot or Miss Marple, Sherlock Holmes or even Feluda the Master Bengali crime detective fiction? Each and every one of these brought a different flavour, a different kind of aura to the entire crime scene, bringing thrills, sometimes with a bit of comic timing, wry humour, or even a strangely unsettling yet relatable feeling, which only compelled one to dive deeper into the mystery to reach its vortex. I got a similar feeling reading this one, as the character of Neel Roy is definitely one of the most relatable ones I have seen created in recent times. Not only is he a genius and a great detective, but that same aura, that warmth, which I mentioned previously, is what I found when I read about him, his story, and his character between the lines. The way he employs Dipti Dutta, their complete camaraderie forms an engaging read. Even Neel’s tete-a-tete with Jimmy Boi, his dog, is simply a hilarious riot. I simply fell in love with the flirtatiousness exchanged as well as Dipti’s eye-rolling. Respite is imparted in the middle of the thrills and chills!

A work of detective fiction, this one is an incredible read with a fast-paced thriller of a story, or rather multiple stories in one, ending on a cliffhanger, providing an opening for the next in the series. Three amazing thrillers are intertwined in one-a murder, a strange kidnapping, and another one. The protagonist, Neel Roy, is called upon to solve the same. It is upon Neel to solve and unhinge these complex woven threads of crime, disentangling much more than what meets the eye.

With the prologue itself setting the pace for what promised to be stellar detective fiction, this one marks a startling debut with a refreshing voice encompassing not only intrigue but also superb suspense, having been fused in a manner that is light-hearted and warm, just like the stories we used to read back then, pertaining to detective fiction. Dark noir, the whiff of the crime mafia, which for me is the ultimate reading material.

Coming back to the suspense, it is engaging, thrilling, as well as one that will make you wonder what transpires in the next, every time the story takes a turn. The plot becomes more and more complex as the story proceeds, this is a plot devised by Sayan with a lot of thought. I must comment because the way he has managed to fuse all the stories together seamlessly without any overlapping is surely a commendable task, I’d say. Not to forget the cliffhanger he has created at the end of this one, which will pave the way for the sequel too. Each story is individually as well as jointly very well connected and depicted.

With the kind of superb and thrilling rigmarole Sayan has managed to create with this suspense thriller, I’d say this will surely be picked and converted to a web series or a crime movie, which will attract a lot of audiences. Towards the end, the layers unravelled, leaving me yearning to find out what actually had happened.

I usually expect so much from a crime novel. To be honest, I want to add here that all those qualities that make up a stellar piece of crime fiction have been imbibed by Sayan. After having read many crime fiction books, I know a great crime thriller when I read one. This one falls into the cosy mystery category, where you enjoy things leisurely, yet your heart is racing away to find out more. Sayan’s book, for me, was like Seishi Yokomizo’s writing; cosy and captivating.

Related: Book Review Of The Paris Apartment By Lucy Foley

A super thrilling read, this one promises to be as riveting a page-turner as some of the best crime fiction you may have come across. Blended with the right mix of humour, a little sprinkle of flirtatiousness, loads of suspense, and oodles of thrills, this one should definitely be on your TBR next.

So, I hope you guys liked this review of The Amateur Detectives by Sayan Sahoo. Do let us know in the comments below which other crime fiction books you have read and which others you would like us to read and review. Stay tuned for the latest and the best in the fields of entertainment, lifestyle, food, fashion, tech and gadgets, finance, as well as all things bookish. Right here at Booxoul, India’s leading book review and lifestyle website.