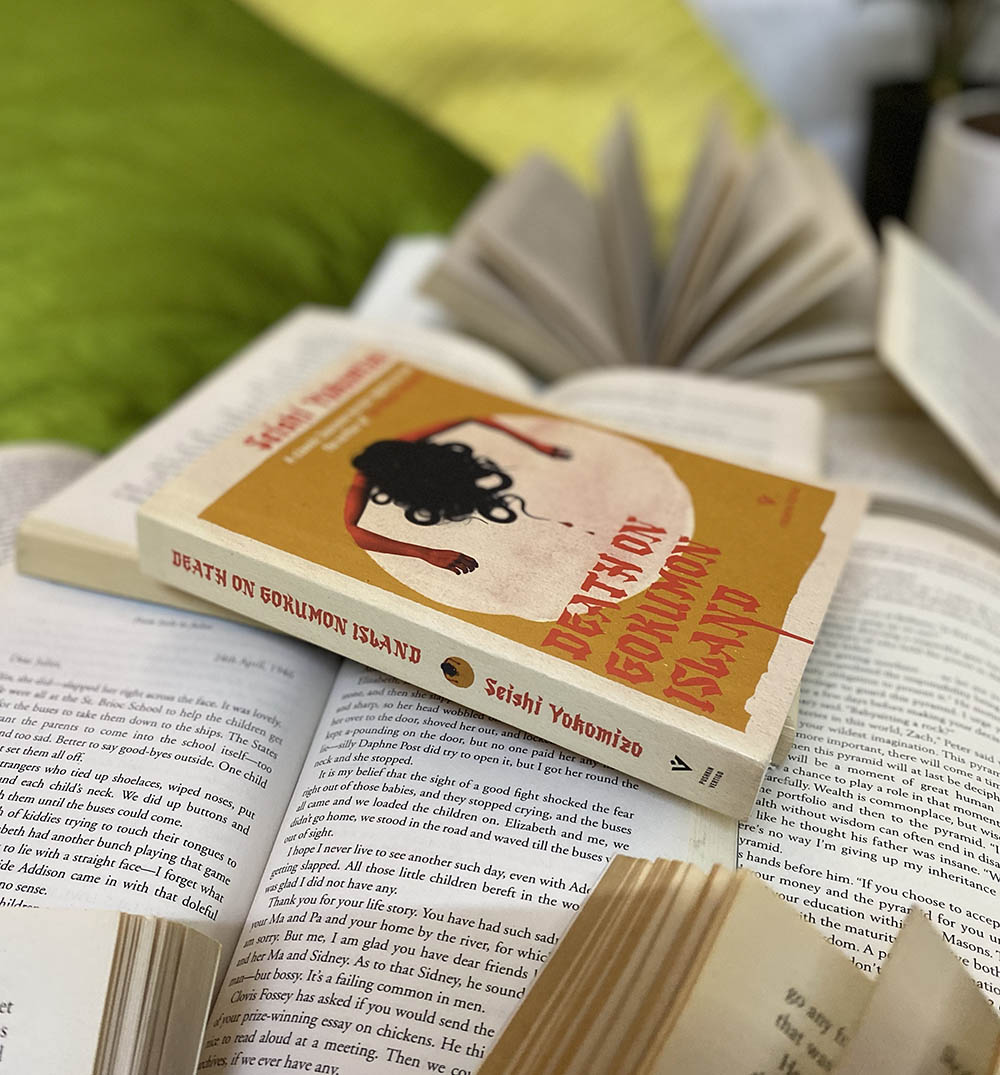 Death on Gokumon Island by Seishi Yokomizo – If you have ever enjoyed reading Agatha Christie and also John Dickson Carr, then go no further as Seishi Yokomizo has created the perfect confluence of these two stellar writers, creating a bizarre and gruesome tale of murders waiting to be solved to decrypt these acts of fiendish devilry. The “It” crime read of the month, this should worm its way right up to the top on your TBR today.

Loosely inspired by Agatha Christie’s And Then There Were None, the brilliant Gokumon Island is perhaps the most highly regarded of all the great Seishi Yokomizo’s classic Japanese mysteries.

Detective Kosuke Kindaichi arrives on the remote Gokumon Island bearing tragic news–the son of one of the island’s most important families has died, on a troop transport ship bringing him back home after the Second World War. But Kindaichi has not come merely as a messenger–with his last words, the dying man warned that his three step-sisters’ lives would now be in danger. The scruffy detective is determined to get to the bottom of this mysterious prophecy and to protect the three women if he can.

As Kindaichi attempts to unravel the island’s secrets, a series of gruesome murders begin. He investigates but soon finds himself in mortal danger from both the unknown killer and the clannish locals, who resent this outsider meddling in their affairs.

The late Seishi Yokomizo, one of Japan’s best-loved, famous mystery writers was best known for his Kosuke Kindaichi series which went up to around 77 books. Many of these supreme works which also found their way towards being adapted for television and stage form some of the best possible Japanese fiction.

Having recently read The Inugami Curse, you can imagine then how excited I was to read Death on Gokumon Island which is one of Yokomizo’s highly regarded works. Louise Heal Kawai who is the translator of this work has translated many other revered pieces from Japanese literature including the highly acclaimed The Cat Who saved Books by Sosuke Natsukawa.

THE PLOT AS IT UNFOLDS

Gokumon Island which was previously a pirate stronghold is now home to 2 feuding families dominating the clannish fishing community. Enter Kosuke Kindaichi with the news of the unfortunate peril-death of Chimata-san, belonging to one of the 2 families, the Kitos, triggering an unwanted series of yet more grotesque and barbaric murders. Whilst Kindaichi attempts to uncover the island’s secrets and put a stopper to these killings, he soon realizes that he is caught in a spider’s web of sorts with a fresh mystery poised to greet him at every juncture, threatening to drown him in malice and suspicion himself. Whether he is successful in unearthing all the secrets which have embedded themselves in this strange island, endangering all who come into this devilish square remains to be read when you pick up the title.

Be it Chimata-San, his step sisters Tsukio, Yukie and Hanako, his cousin Hitoshi San, Sanae, or from Kito’s branch family Oshisho, each and every character tends to have a sort of a physical presence and yet a disembodied connect too, all at once. Take for instance his father who was kept locked away at home following a mental illness, there was something strange yet familiar at the same instance about the whole situation. The fact that Chimata’s main family stood to gain in the event of death is an intriguing revelation enough to set the ball rolling along the path to a suspenseful journey.

Detailed precisionately, It is also fine-tuned on the cultural levels enough to keep it an engaging read and an engrossing premise. Set in the period after the Second world war, the book albeit starts on a comfortable pace yet spirals out to a tornado which will suck you deep in its midst, keeping you hooked uncannily right until the end. The mystery itself is engrossing to the point of a nail-biting read. A Japan post-war, sensitive in its observations, here is a read that is as colourful and culturally rich as it is popularly incorporated.

I want to commence here by stating how Haiku, a form of poetry, which is something you will see quite a bit in this book has all my heart as I am a huge fan of this style of poetry writing. Without adding more revelations, I want to reiterate that Haiku in this case has only added to the reading value of the entire story, adorning the narrative with little poetic jewels that not only aide it by are a real treat for readers.

As far as Kindaichi’s character goes, for me, this was one of those books where I could literally associate with him, his “action”, his off-beat persona as a detective, ordinary almost indistinguishable from the usual traditional Japanese folk post-war. Sometimes, the ordinary is what makes up for a remarkably refreshing read. And with this one, Seishi has proved that character building is truly a master’s art which is perhaps the most important achievement in any writer’s lifetime.

A special mention here also to Louise Heal Kawai, the translator for this writing. Sometimes, the original might be astounding but to put across that same splendid brilliance, ah, now that’s what I call sheer talent. Louise has not only caught onto the essence of Seishi’s writing, she has managed to encapsulate all those feelings Seishi must have felt while creating the original piece’ de extraordinaire’.

A bit challenging and complex, what initially started as a casual explorative unfolds into something which is a serious threat to your minds as the book shall gradually unfold itself, settling on your mind’s eye, lurking deep within the corridors of your thought processes, pushing and cajoling the limits of your logical reasoning.

Drop, drop just drop everything and go for this one if you want to read Japanese fiction which is exciting, daunting as well as splendidly familiar at the same time. A PoV with some serious reading advice? Grab a cuppa of hot chocolate or Irish coffee and you are good to go, peeps, investing your soul in these unchartered lands.

So, hope you guys liked this review of Death on Gokumon Island by Seishi Yokomizo.

Let me know some more Japanese literature recommendations in the comments below. Also, stay tuned for the best in the field of entertainment, lifestyle, travel, fashion, food, tech and gadgets as well as all things bookish.