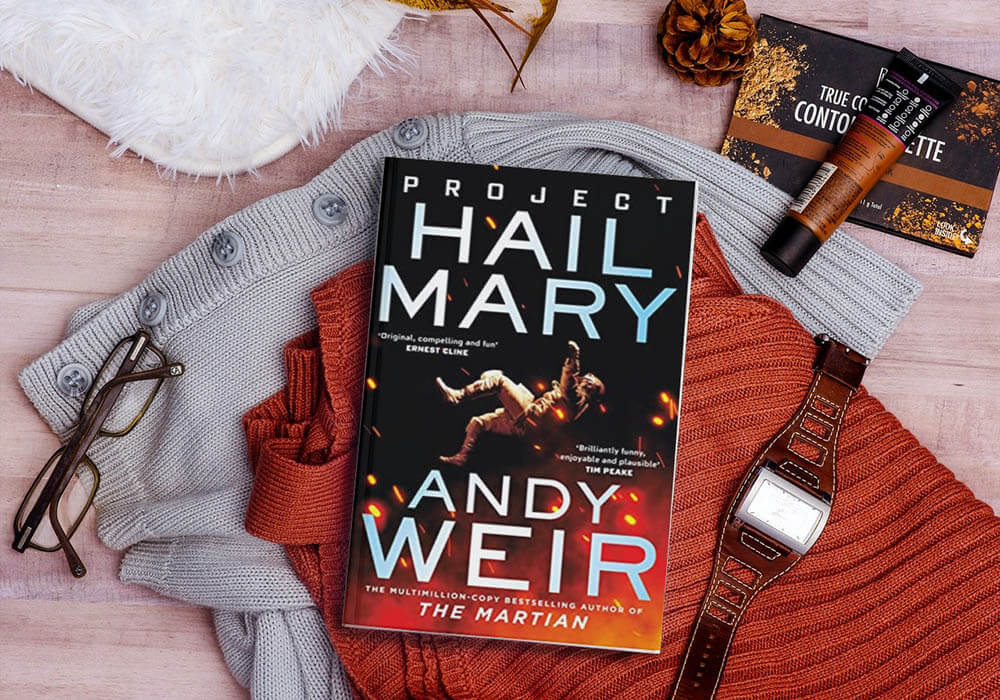 As Bill Gates has famously put “How far would you go to save the world?” in a header reviewing this piece of creative sci-fi excellence by none other than Andy Weir, here is a little write-up explaining why Andy Weir’s writing is so to the point, mass appealing and enthralling, giving us a sneak peek into the future which is all at once daunting as well as fascinating.

So, tell me something guys, have you ever read a book which takes your mind into an imagination spinning so wildly out of control that you can see that it is going into overdrive but still are helpless to do anything except read on further?

Just finished reading Project Hail Mary by Andy Weir and was I swept away into oblivion or scattered like stardust on sands of time, waiting to be called upon and ought to be taken to unknown fantastic lands in the future.

THE PLOT AS IT GOES

Trying my level best to not give away too much of the plot, this is a story of Ryland Grace who is a science school teacher, who gets up one day, absolutely alone on an automated spaceship in a different galaxy altogether with absolutely no memory of how he has landed there. Figuring out that he is possibly on some earth-saving mission, one that thwarts the elements of both space and time, he gets onto the task of saving Earth from Astrophage-a micro organism which is eating up the Sun, dimming its energy and light, threatening to darken out our Galaxy into zilch and oblivion. If Ryland fails in this humongous task, and Ice age-like phenomenon will descend upon humanity threatening not only to wipe it off but also the entire cosmic star system we are a part of. Whether he succeeds, whom does he meet along the way onto this impossible feat, well won’t say more coz I want you guys to really read this one ya.

To begin with, this one was as fantastical in creation as it could get. With concepts poised to keep your thoughts spiralled out of control constantly, here is a work by the man who showed us the survival game on a planet such as Mars without us leaving the red sand without rescuing Mark Watney. So, exactly with that kind of a daunting feel, this one starts with the qualm of mass extinction and destruction looming large making it a thrilling premise, to begin with.

Well, as Grace isn’t the only one trying to stop Astrophage from dimming out the Sun, enter Rocky the alien (Ok, apologies I had to give this spoiler huh!) who has been depicted so fabulously that I could not help but marvel at the manner in which Weir has painted a highly relatable picture of an ET whom we surely will come to identify as the next in the Alien species in the near future.

The manner in which the relationship between Grace and Rocky develops, their camaraderie, their interactions, their tete-a-tete, and their exchanges were absolutely amazing to read. It was satiation at another level as the plot proceeds with such a heroic kind of feel, with each saving the other’s skin in times of distress, almost like human emotions deciding to scatter themselves into the cosmos waiting to be decoded. Well, compassion and warmth are surely a feeling that certainly exists everywhere, in the cosmos too, as I feel.

A hypothetically great and aptly put notion of a presumable first contact is what makes this work creatively different as well as much more challenging. Well, on the reading front, it was a thrilling experience to read about an alien who was actually just an alien- ET who had a different modicum of communication from a humanoid ET which is usually what is depicted in our science fiction books.

The bonding which Grace and Rocky end up having, being two lone isolated travellers on an impossible journey made up for an amazing read. I especially liked the fact that how in spite of not being able to communicate, and being different from each other they developed a warm bond, a friendship which was a treat to read about.

The way Grace and Rocky worked together to solve the challenge they were mutually facing gave me a kind of a feel-good thingy as it was pretty much human-like you see.

NOT SO UMM GREAT

Well, even being an excellent piece of writing it is evident that a creature might have its own set of flipsides. In this case scenario, for starters, it was pretty unbelievable the way in which Grace is shown to be picked out randomly for this task. I mean with the kind of meticulous planning shown by the United Nations it kind of became a bit off the hook, the way Grace was made to step up and forcibly take control of the situation.

Also, I personally felt that towards the middle of the read, it kind of became a bit overwhelming and monotonous to go on delving into each and every obstacle either overcame, whilst on the way to this Herculean task. Kind of needed a bit more edit there, I feel. Too much data, overwhelming perhaps for some, to read so much as technology tends to get toxic after a point no?

TO SUM IT UP

A great sci-fi read, go for this inevitably as it is one of the best science fiction written in quite a while. With a meticulously conceived and executed plot, amazing characters, a great build-up and technological advancement theories and a lot more, here is a sci-fi you cannot afford to miss.

A lone astronaut.An impossible mission. An ally he never imagined. Ryland Grace is the sole survivor on a desperate, last-chance mission – and if he fails, humanity and the earth itself will perish. Except that right now, he doesn’t know that. He can’t even remember his own name, let alone the nature of his assignment or how to complete it. All he knows is that he’s been asleep for a very, very long time. And he’s just been awakened to find himself millions of miles from home, with nothing but two corpses for company. His crewmates dead, his memories fuzzily returning, Ryland realizes that an impossible task now confronts him. Hurtling through space on this tiny ship, it’s up to him to puzzle out an impossible scientific mystery and conquer an extinction-level threat to our species. And with the clock ticking down and the nearest human being light-years away, he’s got to do it all alone. Or does he? An irresistible interstellar adventure as only Andy Weir could imagine it, Project Hail Mary is a tale of discovery, speculation, and survival to rival The Martian — while taking us to places it never dreamed of

So, hope you guys liked this review of Project Hail Mary. Let us know in the comments below which other books you would like us to read and review. Stay tuned for the latest in entertainment, travel, food, fashion, finance, lifestyle, tech and gadgets and all things bookish.