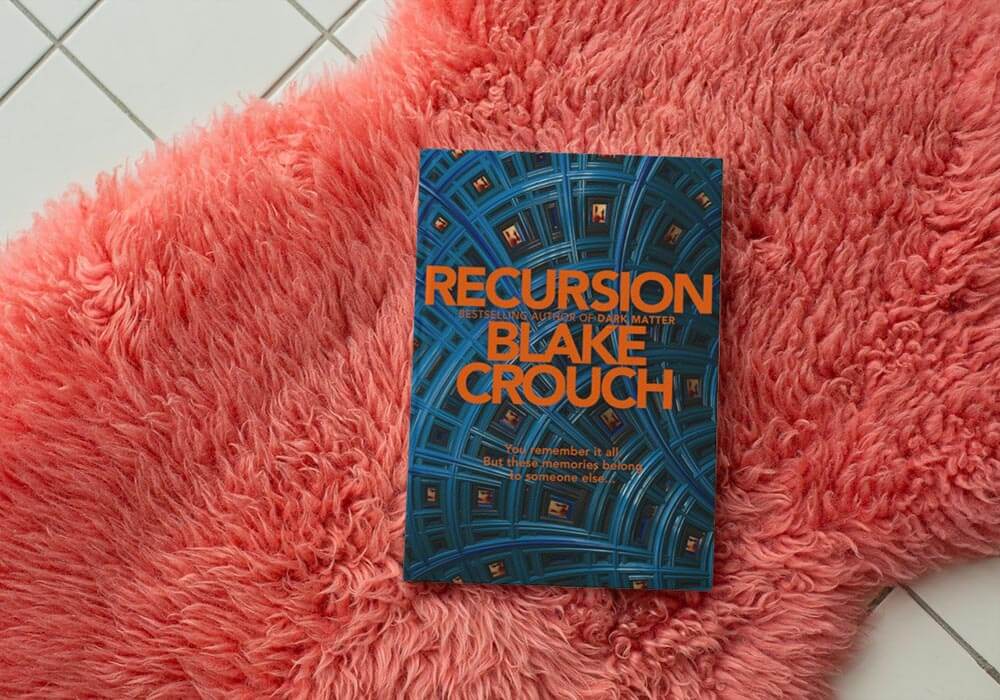 Exploring the fantastically fascinating world of Blake Crouch’s previous book Recursion on the eve of the release of his upcoming best seller Upgrade.

Is it possible to rewire time and rewrite its transpiring? Is life really a myth and not the hard-core reality it is touted to be? What if you could rewrite time?

Through a book review of Recursion, Booxoul ponders over his unique style of writing and endeavours.

Do you know the sort of feeling that one experiences when being doused with cold water right in the middle of a hot shower? Exactly my point whilst reading Blake Crouch’s Recursion, a science fiction poised not only to blow your minds off their hooks but give you a shiver in that uncanny manner when you know that you are freezing but cannot make out the source of that feeling.

this question posed at the start of the blurb at the back of the book is daunting in itself, rewiring my brain and fuzzing out my logical chain of reasoning. Followed by an even uncanny “My son has been erased.”, Recursion Crouch’s previous work has made me adore his writing to the point of reverence. When reality shifts to another paradigm altogether the result created can be multi-dimensional-catastrophic, magnificent, horrendous and anything practically that comes to one’s mind.

However, in this previous best seller by Science Fiction king Blake Crouch, reality seems to not only be shifting perspective but experiences too. The plot begins when all across the country people are waking up to lives different from the ones they have been living, for the time they can remember. Yes, you heard that right! False Memory Syndrome, is a mysterious new disease which is gripping people, afflicting them with the memories of a life they have not lived? Sounds complex, doesn’t it?

Well, it is now upon the protagonist Detective Barry Sutton to uncover the reality behind this strange phenomenon. Will he succeed in finding out the real reason behind these seeming timeline shifts people are experiencing? Or will he fall prey himself to something which seems sinister, threatening to break into and rupture the reality around him forever? Well, no more spoiler here peeps, as I won’t reveal any more beyond this. Go read it to discover the facts and be mesmerized yourself, first person.

To begin with, I am going, to be honest. I can simply not even begin to fathom how Blake manages to create such completely intricate plot lines as well as character detailing let alone the superb gait of the story. Agreed, sci-fi is one such genre where a writer has complete freedom as far as world-building and conceptualizing goes, but nevertheless, I have always marvelled at the fact that Blake’s Universe is always one which you want to be sucked up into, regardless of worrying about what you may find there, not once thinking about the consequences. Be it the technology, AI, science, quantum mechanisms, the physics, each and every aspect of Blake’s writing has always intrigued me, leaving me speechless with the exemplary vision he manages to write down as if peeping into the future. On second thoughts, wait for this, not peep into the future, rather show us a version of it which we almost believe to be true and in the making for certain. That, for me at least personally is what sets him apart, making him the supreme maestro of his arena, the king of sci-fi as I fondly refer to him.

Barry as the main hero, the protagonist is killer stakes, I’d say! The way he portrays the helplessness, the power, the vulnerability and the flamboyance, all alternating at the desired junctures, is a treat to the mind’s eye. His helplessness is almost palpable to the point where one can begin to empathize with his fate.

Likewise, for Helena. As another important character in this thriller, she comes across as a rock upon which Blake has built most of his emotional premise, depicting her weak as well as powerful stances. It has been a treat to read the different facets, the alternative realities she finds herself in, the result of her own actions and the result thereafter.

Marcus Slade is my favourite pick from the book. For me, he remains the vamp I will remember for the rest of time, until after eternity possibly because of the way he has justified his wrongdoings. “There is no past, present or future. Only Power. And those who wish to seek it…”. Indeed, looking at the whole mechanism through a different tangent of quantum physics was an altogether enlightening as well as satiating experience, both from a reader’s point of view as well as a human being who wants to know the end to end of the cosmos he lives in and is a part of. Felt as if I was floating in real-time, the body kind of experience, reading about the alternating, reversible timelines.

It is a brilliant confluence of sci-fi at a level very few can manage to master, crack through and present in such a ludicrously, relatable and captivating piece of writing. Kudos to him for managing to put forth a work which is marvellous, and excellent at all possible levels of creative aesthetic.

A breathtaking exploration of memory and what it means to be human, Recursion is the follow-up novel to the smash-hit thriller, Dark Matter, by Blake Crouch.’Recursion takes mind-twisting premises and embeds them in a deeply emotional story about time and loss and grief and most of all, the glory of the human heart’ – Gregg Hurwitz, author of Orphan XAt first, it looks like a disease. An epidemic that spreads through no known means, driving its victims mad with memories of a life they never lived. But the force that’s sweeping the world is no pathogen. It’s just the first shockwave, unleashed by a stunning discovery – and what’s in jeopardy is not just our minds. In New York City, Detective Barry Sutton is closing in on the truth – and in a remote laboratory, neuroscientist Helena Smith is unaware that she alone holds the key to this mystery… and the tools for fighting back. Together, Barry and Helena will have to confront their enemy – before they, and the world, are trapped in a loop of ever-growing chaos.’ A fantastic read’ – Andy Weir, author of The Martian.

So, hope you guys resonate with my irrelevant musings of this superbly brilliant sci-fi, possibly one of the best of all times, Recursion by Blake Crouch.

Do let me know in the comments below which other sci-fi books you want me to read and review. Stay tuned for the latest in the field of entertainment, lifestyle, tech and gadgets, fashion, food, as well as all things bookish. Only here at Booxoul, India’s best book review and lifestyle blog.