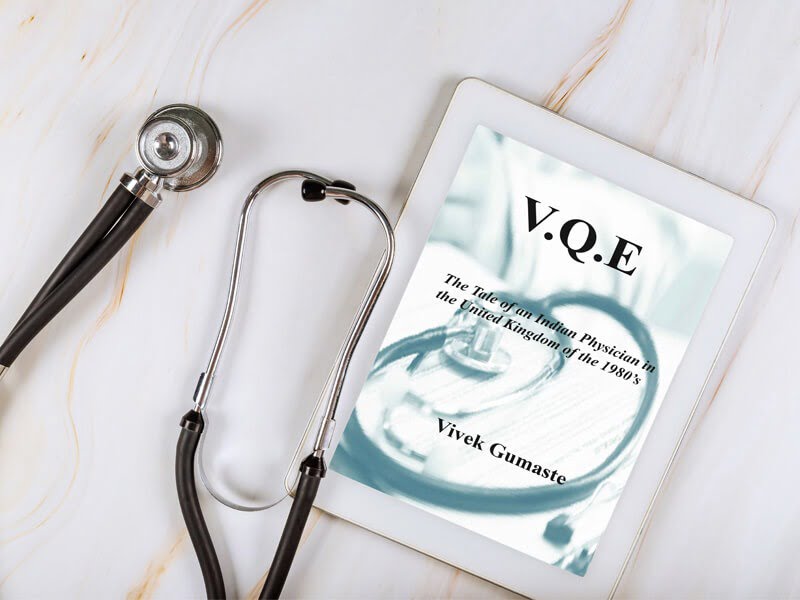 V.Q.E: The Tale of an Indian Physician in the United Kingdom of the 1980s By Vivek V Gumaste

I believe writing is a powerful enough weapon that can bring upon changes unimaginable. It also is a time machine, that can transport you to any part of the world, whether future or past. V.Q.E: The Tale of an Indian Physician in the United Kingdom of the 1980’s by Vivek Gumaste is one such book that took me to 1980’s UK. The stark reality, that life in this ex-colonial country was a constant struggle to make one’s worth, especially for Asians.

This is a story of one such Asian, or I would rather say a medical memoir of a Doctor, whose dream is to move to the United States, and make a mark there. And to achieve this, he first moves to the United Kingdom, where he explores and experiences their work culture and pass professional tests, which will make his transition to the US a little bit less cumbersome a task.

Reading this book V.Q.E by Vivek Gumaste made me realize that life as an immigrant isn’t all hunky-dory as it seems. It is fraught with one’s struggles to make a name, every step is a precarious knife’s edge, one move can make or break one’s future.

Vivek has very skillfully interwoven his professional journey with the political turmoil, the then UK was going through, giving me a glimpse in of the 1980s UK. Through the author’s eyes, I got see the aftermath of some of the famous political decisions, racial discrimination that was rampant then, the wedding of Prince Charles and Lady Diana and the madness of it that spread throughout the world like a wildfire. It was a journey, that did not disappoint me at all.

Vivek’s V.Q.E is not a story, which has a high-octane drama filled with twists at every turn of the page, neither it is filled with words that are worth writing in a diary, instead it is a gently remarkable book about a doctor’s journey in the UK and how it shaped and prepared him for the ultimate goal of his, that was to move to the US. Vivek spun the web of words quite elegantly with the ink of his memories and bowled me over with his exquisite language and style; a flowing but succinct and easy to read prose. In addition, he did not overly stretch the story. He put that specific part of his life on papers that we could peruse in a very simple way.

I strongly recommend the book V.Q.E: The Tale of an Indian Physician in the United Kingdom of the 1980s by Vivek Gumaste to readers of the genre of Memoirs/Biography/Autobiography and to the future doctors are persuing Medical degree in foreign lands.

This book has earned 5 on 5 for its sheer simplicity and high engagement quotient.