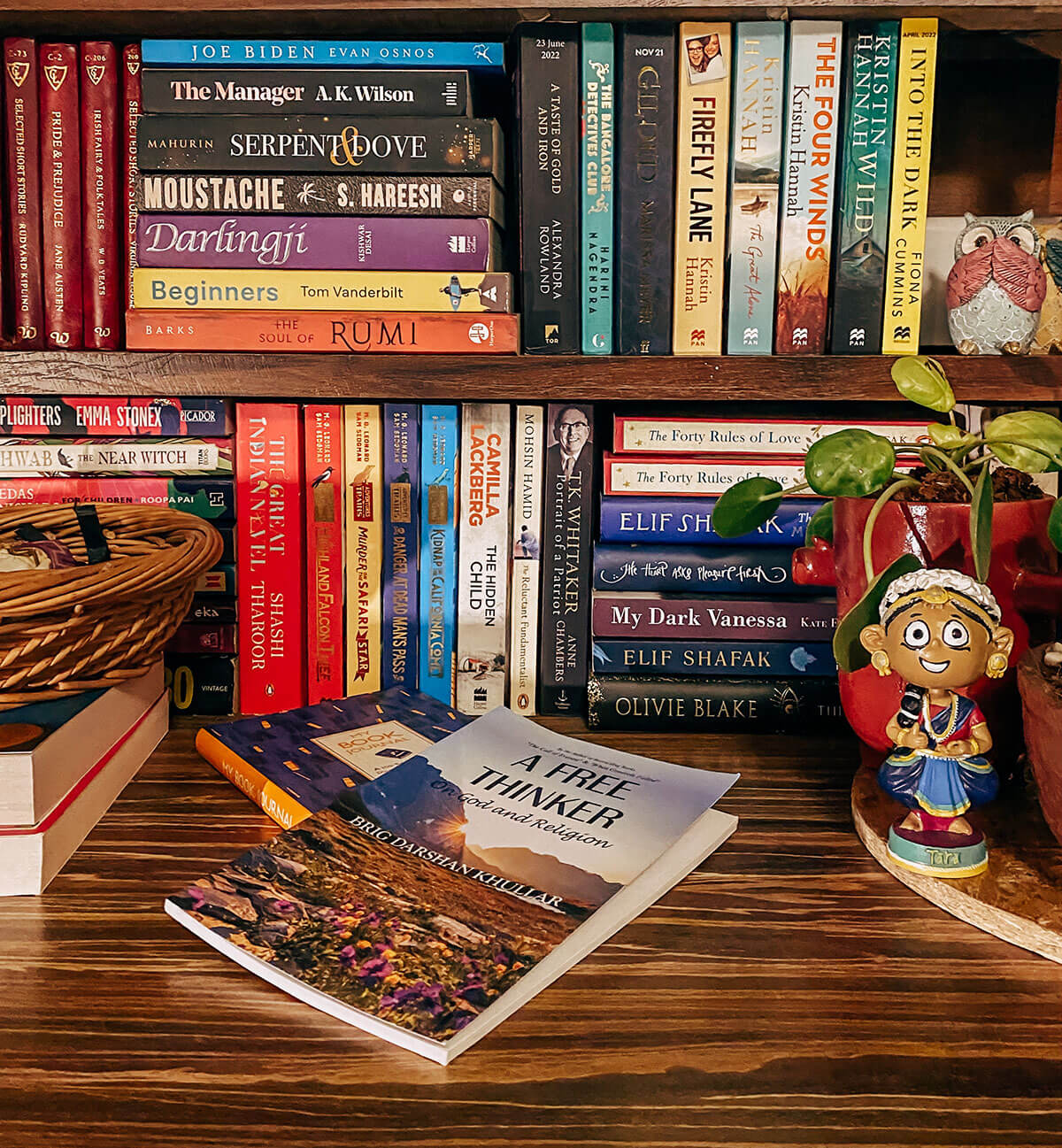 Lord God, I often think of you.
I was weak I prayed a lot.
I am still weak sometimes I do
Who are you? Do you also have your God as helpless as you?

Free Thinker – On God And Religion

A Free Thinker on God and Religion is not a religious book. It is a free thinker’s refreshing foray into the field of metaphysics. The book offers contrarian insight into the idea of God and the intriguing stranglehold religion has wielded over the minds and lives of humans. It offers comparisons with the natural world and contemplation of nature in its entirety. It makes the reader question conventional, received wisdom.
The views are thought-provoking and original. The author offers his perspective on God, heaven, hell, soul and religion in separate but interlinked chapters. Implicit within the contents are the issues of spirituality, life, death, afterlife and rebirth. The book briefly describes the five major religions of the world, highlighting they’re outstanding and also not so flattering features. Pointing out the fact that most religions are a mix of the light and the dark, it asks the reader to ponder over inherent contradictions and embrace the good and the sublime.
The book ends with the chapter ‘Poetic License’, urging the readers to draw their conclusions.

Ever thought about how it would feel to defend what has been lying undefended for aeons, or about contraindicating a pre-established thought set or about seeing the very basis of the genesis of our existential-religious, spiritual, holistic and otherwise from a completely different spectrum?

Well, that is exactly what this book, for me at least has all been about.

About going back to your roots and questioning their core. About a more radical, in fact, more logical,  if I were to use the correct word ‘insight’, which questions not only our existence, purpose and drive in life and the basis of our being it also explores, contemplates and compares it with nature in its entirety.

Confused? Well, let me explain this bit by bit. Firstly, just to give u a very quick short brief. This book has been written by Brigadier Darshan Khullar, an Author who is a soldier, and mountaineer as well as the recipient of several notable honours such as the Padma Shri and Arjuna awards as well as many others. Having written several books on mountaineering, political science, and military history, I must admit, I felt the most possible absolutely new approach towards not only describing and shedding light upon the five primary religions of the world but also pondering over the underlying contra indicatory facts that are the basis of them, yet eventually making us embrace what is the good and sublime from the lot.

Brigadier Darshan begins this one by giving us a foray into his idea of who or what is actually God. As he has rightly pointed out, Baruch Spinoza the Dutch philosopher has regarded God as the Principal law of nature, the sum of all eternal laws. Funnily, if we were to see the other perspective Bertrand Russel says that “It is very plausible that as a matter of fact this world as we know was made by the Devil at a time when God was not looking.” Thus, breaking this down minutely Khullar further elucidates that we as a group which is existential, having felt the need for a leader decided to attribute it to a Godly figure. Similarly, he states that nature has created the opposites to balance life on earth and thus it does not differentiate between the good and the evil who must constantly keep fighting each other in a see-saw battle of sorts.

Breaking this down further, he has minutely explored this at the community/societal level stating how it is an aggressive minority that generally drives any society. Linking this to questioning another important argument, aka the existence of heaven and hell, Brig Khullar subtly has put across the ideology that whatever may be the case scenario, we as humans cannot deny that we exist in the middle of all these occurrences which we can attribute to being divine or hellish, further re-establishing our ideology that yes all exists in between the space-time continuum we are also a minuscule part of.

Addressing the concept of “Soul”, the author has beautifully perused the true essence of our being classifying it as the unborn, yet eternal, permanent and primaeval. All-pervading, unchanging, unmanifested and unthinkable, his foray into each and every conceptualization has all but wowed my chain of thoughts.

Further enlightening us by stating that as per Buddhism the ideology that there exists non-existence aka avasya (a non-self that cannot be defined) is what really had me mulling over how beautifully he has penned down these absolutely precious thoughts, scattering these pearls of self-wisdom in a manner so effortless, easy to take away from yet a sort of a boundless entity you can choose to know if you are a free thinker aka a radical, logically inclined person.

Yes, that is exactly what is the concept and purpose of this book. A Free thought cycle. Thinking out of the box. Compelling the preset chain of nationalities to take a back seat while allowing your better judgement to take over.

It is not like Khullar has condemned religion. He has in fact, given an in-depth detailed explanation, high lighting upon the primary facets of the main 5 religions of our world, delving deep into their complexities. Hr has simply, radically laid down the principles, thoughts and mentalities involved behind each of them, again giving our chain of thoughts free rein. Well, poetry, I know. I got into the mode, thanks again to the brilliant poetry towards the end put forth by him which summarizes his views on God and religion, although having satire and irreverence yet surely the ones if taken with the right spirit, some fine bits of writing which you shall strongly feel you have ‘been there, done that for..’.

A Must Read: Book Review Of Kachro by Chandrakant Desai: A Biography Exploring The Pursuit Of The Inner Soul

A brilliant, non-religious book. I say non-religious because Brig Khullar at the start itself has specified his intent and reason behind sharing this absolutely extraordinary piece of writing with us. The acceptance of the Supreme force is one that defies description. An amazing rare work you must read.

So, hope you guys liked the book review of Free Thinker – On God And Religion By Darshan Khullar. Let me know in the comments below what other articles you would like us to come up with. Keep tuned in to catch the latest in the field of entertainment, travel, food, leisure, tech and gadgets, plus all things bookish. Only here at Booxoul.