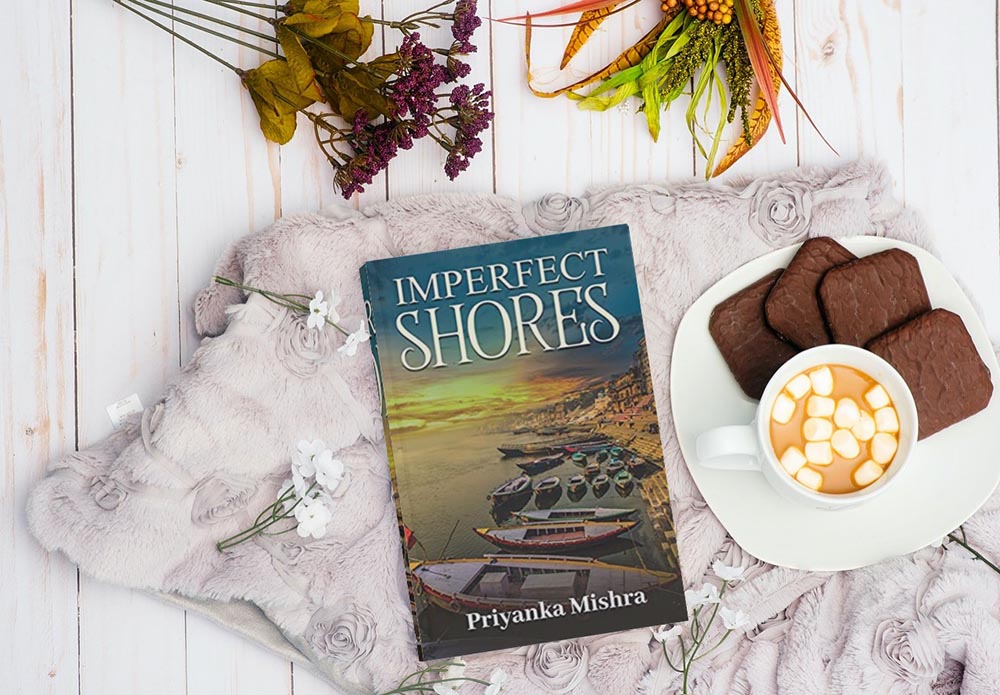 Imperfect Shores by Priyanka Mishra is a book not only has well-developed characters and plot but has the perfect infusion of those life lessons which make it a brilliant read.

A study of sin and wrongdoing in a manner which is unconventional yet very much relatable, here is a story which is sublime yet lays down each and every emotion in a crystal-clear thread, perusing the facets of life intricately.

Many times comes a story which decides to flow with you like the waves of the sea, enticing you, compelling you to drift alongside it, like dried twigs in the wind, moving away relentlessly towards wherever it takes you. At such a time you are at a loss to do much except follow the course of these winds, waiting to settle and see where the story shall ultimately deposit you.

One such read I finished some time ago is Imperfect Shores by Priyanka Mishra, a debut Author whose writing has managed to entice me exactly in the manner which I just described, leading me onward towards unknown lands.

The story which manages to question multiple major qualms mainly revolves around how when the demons of the past decide to defile and burden the present, one is left in the midst of a rigmarole which cannot be easily manoeuvred.

This being a story revolving around many characters I was stoked to see how well being a debutant writer, Priyanka managed to depict not only Kaumudi but also the other characters of Shyam, Bansi, Muniya and Ramdulari. With each of them complementing the other’s character and positioning in a manner so as to signify support as well as an entwine, she has excelled in creating the perfect equilibrium in the plot with reasonable justice being given to all areas of the story.

These couple of lines that form a part of the blurb primarily had me invested, consuming my attention right from the time I had set my eyes on the book:

The ghats of Benaras become an analogy to their own lives signifying the influx of people who come to worship but leave their sins behind to defile the waters and change the Ganga forever.

Indeed, when people go to Benaras for any kind of pilgrimage or a sacred act, little do they realize that in the process of cleansing their own sins they are actually defiling and besmirching the Ganga with the onset of their own dirt. Purging a pure thing by offloading your own dirt is something we have been doing for ages now. A powerful read signifying how when people purge their souls of all that is wrongdoing, they in the process end up leaving the environment chosen to cleanse themselves mucked up.

Be it Kaumudi’s character, or even Ramdulari or Munya, each and everyone was formed and put across diligently, portraying many sensitive emotions in the process. A brilliant plot, the story works its way over a period of time, depicting not only battles of virtues but also narrating and telling us about the mishaps of misunderstandings in relationships.

Related: And Before She Realised It | Piroja Shroff | Book Review

A good debut, albeit I strongly felt a bit more editing would have ended up making the narrative sleeker and crisper. Nevertheless, a brilliant debut, I’d say.

Kaumudi is a young girl, who lives in Mumbai. She enjoys her chosen career but perceives confusing gaps in her life and soon finds herself on a journey of discovery that takes her through the hidden and troubling past of her family. In trying to discover her roots, she unearths shocking truths that have shaped her present reality. Shyam and Bansi are two opposing forces that remain in a battle of virtues throughout. But like the raging Ganga, the lives of their wives, Ramdulari and Muniya take several twists and turns till they entwine and each becomes a shield and support for the other. The ghats of Benaras become an analogy to their own lives signifying the influx of people who come to worship but leave their sins behind to defile the waters and change the Ganga forever.  The toxic brew of the past burdens and misunderstandings spawns decades of separation between Ramdulari and Muniya till Kaumudi starts to piece together her life’s puzzle. She tracks down Muniya, but, will it be too late?

So, hope you guys liked this review of Imperfect Shores by Priyanka Mishra. Do let us know in the comments below which other titles you would like us to read and review. Stay tuned for the best in the field of entertainment, lifestyle, travel, food, fashion, finance, tech and gadgets as well as all things bookish. Also, stay tuned for the most exciting giveaways, book talks as well as a host of activities planned especially for you, right here at Booxoul, India’s leading book review and lifestyle website.