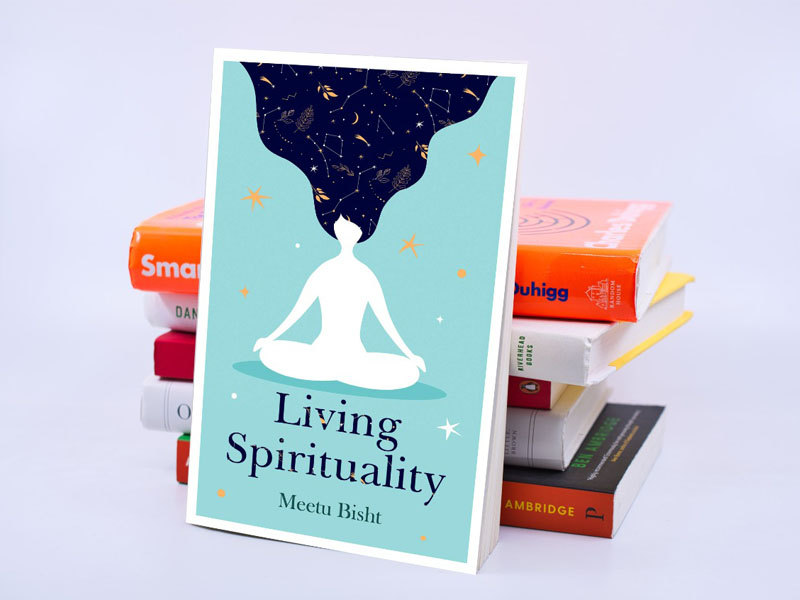 Spirituality is a brave search for the truth about existence, fearlessly peering into the mysterious nature of life.

The above quote does not only put across very aptly, the true meaning of spirituality but also highlights that it is something that is self-taught and inherent, as also portrayed by this book called Living Spirituality by Meetu Bisht.

This piece of writing by Meetu Bisht encompasses fresher, newer concepts with regards to the adaptability of Spirituality, whilst challenging the preset notions, which have been in vogue for years now. An intriguing as well as challenging concept to work upon, the Author Meetu has built a narrative that is not only unique but attempts to muse the topic reasonably well albeit in a non-rebellious, subtle manner.

In today’s era, when there seem to be more than hundreds of Gurus and spiritual motivators attempting to alter and influence our lives, whilst trying to steer them in the right direction, this title comes as a breath of fresh air, owing to its conforming to a non-conventional approach while doing so. True, these Gurus and motivators are attempting to steer and prod us in the right direction, but are they really managing to put us on the right, logical path as far as rationality or spirituality is concerned? Maybe not.

RECOMMEDED: Book Review of Rescript Your Life by Reeta Gupta

Meetu’s approach to achieving spirituality is closer to life and simple unlike other larger than life claims that contrary to the promises made are simply that- empty claims that stand tall.
The language is lucid and the narrative in a complete flow yet having said that even if we were to pick up a random section and explore a complete chapter as a whole it would still resonate out in a manner that would appear as a complete chunk of enlightening information relating to a particular aspect of spirituality.

Apart from building spiritual awareness, this book also enlists the benefits of the same for us. Busting some highly popular myths related to this concept, it tries to highlight ideal spiritual conduct as well as attributes of spiritually inclined people through the narrative. Thus, providing a very neutral and unbiased view of how spirituality can and should be adopted in one’s lifestyles, pursuits, actions, thoughts and relationships, has been summarized through this one.
I especially liked it for its fearless, unbiased as well as rational and logical approach towards the subject matter whilst taking care to not call out against the preset notions with regards to spirituality in a negative light.

To quote Carl Jung, “One does not become enlightened by imagining figures of light, but by making the darkness conscious.”

To emulate it in relation to the above, spirituality, too is something which cannot simply be achieved by following another or his given set of ideologies, rather it is a process of self-evolution and self-actualization whilst getting onto a path that leads one to their true inner calling. That calling is not only practical but also peaceful, one which is relatable as well as followable.

Hope you liked the book review of Living Spirituality by Meetu Bisht. Let us know in the comment section.