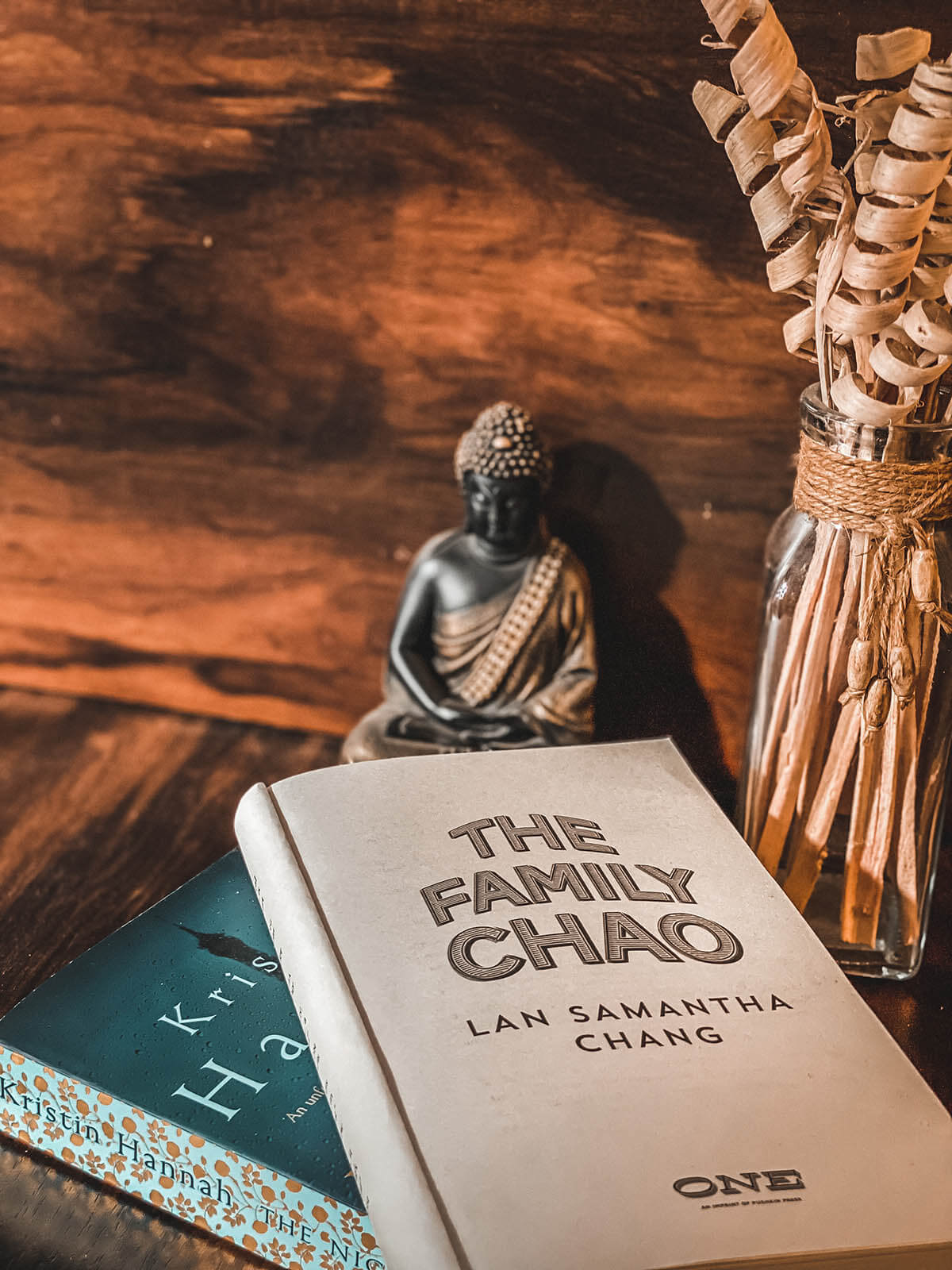 Read “The Brothers Karamazov”? Read the book The Family Chao By Lan Samantha Chang to check out its fantastic spin-off….

For years, the residents of Lake Haven, Wisconsin ignored the whispered troubles about the Chao family, if only to keep eating at the best restaurant in town. But when tyrannical patriarch Leo ‘Big’ Chao is found frozen to death in the family’s meat freezer, scandalous events force the community to turn its attention to the three Chao sons.

Dagou – presupposed heir to the business.

Ming – the accomplished city lawyer, is determined to sever ties with Haven’s Asian community once and for all.

James – is a naive college student, who is only just learning of his family’s past.

When the family’s dog mysteriously disappears, and Dagou ‘Dog Eater’ Chao is held on trial for his father’s murder, the Chaos’ turbulent history spills into the public eye, and a small town looks on in disbelief. . .

“Are you looking for strange flavours, ethnic exoticism, family hostility, immigrant anxiety served with a heady dash of hatred?”

This line which will surely grab some surprised eyeballs is from a book I recently happened to finish, which seems like the perfect recipe for a narrative so intriguing that it will surely keep you pining to know the eventuality and its resultant fate.

That is exactly the whole point and the summary of the style of writing Lan Samantha Chang has encapsulated through this book titled “The Family Chao.” Of course, not to forget the fact that this is sort of a classic retelling of the book “The Brothers Karamazov” by Fyodor Dostoevsky. Albeit this one was written way back in 1879, focusing on human behaviour under troubled, challenging sort of social and philosophical constructs, this one which is an obvious retelling does more than ferry the story across cultures from a Russian to a Chinese base, not to forget the century modernization, moving from the 19th back then to the 21st in the latter.

The story that grapples around the lines of drama, conflict, inheritance, desires, deceits, and the dirty secrets of a family at large is undoubtedly one ambitious spin-off from the original it tries to retell. Revolving around Leo, his wife Winnie and their sons Dagou, Ming and James it is written in a third-person perspective to give a more universal and unbiased spectrum to the whole scenario. Leo, whose character is as ugly and lewd as it gets is only dwarfed by the fact that his sons have been sketched to be more bumbling and gawkish as compared to their father and not so low morally.

The courtroom scenes definitely made up for some of the best reading in the book. Each character has been designed and proceeded along with a purpose, to infuse that same seamless gait into the plot and the narrative that makes up for the flamboyance the concept has been envisioned upon.

Though I want to share here that with a story of this magnitude, there certainly being a pressure upon the writer to deliver Magnifique might have caused a bit of an overshooting and overlapping as far as the individual psychology, cultures, relationships and the family dynamics of individual characters are concerned. Drawing it in such a manner so as to not only make it a poignant, complex family drama, the element of murder does more than entice the readers to something underlying which is more sinister than what actually appears on its surface.

A good book that will help you delve into the ergonomics of an Asian family, as well as many other interesting elements that although intimidating all at once, will slowly sink in, gathering themselves slowly, building across time, as you proceed and dive deeper into the story, leaving you with more than what you expected in the first place.

Related: From Pandemic To Pain To A Lifetime Of A Multitude Of Emotions: Violeta By Isabel Allende – A Book Review

An engaging cross over which offers mystery, drama, murder and a lot more, all rolled together in a single read along with a sprinkle of the immigrant angle, this one is surely a title that will leave you spellbound. A good spin-off, getting its own strengths to the table whilst re-narrating the old classic. A fresh read on a classic family drama, I’d say.

So, hope you guys liked this review of The Family Chao by Lan Samantha Chang by us at Booxoul. Do keep tuning in to catch your daily dose of the best and the hottest content in the field of entertainment, travel, lifestyle, food, tech and gadgets as well as all things bookish. Do let us know in the comments what other blogs you would like us to get for you.

Striving to get you only the best, coz you guys have just to chill, tune into us daily and voila, we will do the rest!! Ah well, bad rhyme but good intention eh peeps.