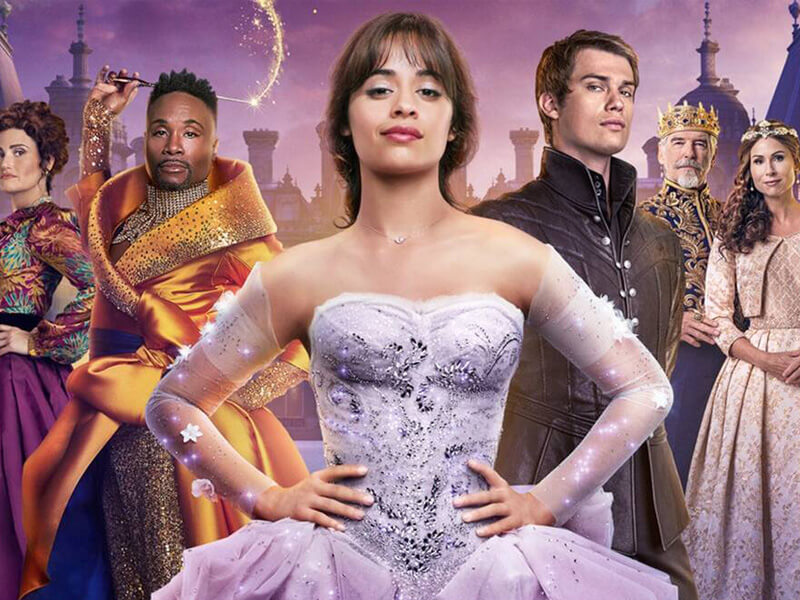 No matter how your heart is grieving, if you keep on believing, the dream that you wish will come true.

True that is. The power of believing in your dreams. Times have changed, perspectives different, it’s a new world and a completely different take even on a fairy tale that forms a cult classic. Nevertheless, some core visions never change.

Well, well, well peeps, this a refreshing new take on a fairy tale which has been a part of our lives all throughout. A musical with hints of humour, this Amazon Prime Exclusive promises to not only entertain but more importantly casts light upon certain very important issues which stand to be pushed at the back otherwise. Women empowerment and the whole point about women uplifting their so called secondary stature to a status quo with regards men, that is one vantage put across strongly through this musical retelling. The original fable had somehow given more weightage to Ella as a demure, subtle kind of personality, one who has given in to the ways of the world. On this accord, for me this new retelling was refreshing of sorts in the manner that Ella’s character kinda had a hint of a head strong persona to it. She dreamt big and also aspired to fulfil the same through the labour of her own love. She understood the importance of hard work , resilience and dedication and at the same time did not want to be recognized through another’s title or as a secondary person. This,  for me, was one of the major positive edits to the original as I personally feel that this perspective change to the age old ideology of the woman being tagged to or recognized forever by the man she marries is orthodox and needs to be done away with.

This is a musical version and I was a little let down with the fact that it was slightly short of an average Disney Musical. Agreed some of the tracks were good, in fact they had a nice foot tapping sing along kind of rhythm to it.  However, a couple of them were short of the usual Disney standards if truth be told. Characters of the village introducing themselves with the song “I want” was a cute piece Also highlighting the sweet, optimistic nature of Ella is the track by Des‘ree, “You gotta be/Rhythm Nation” , a track I feel speaks volumes about the new age Ella along with giving a voice to all people of town. This one is a akin to a village Anthem giving the movie the 19th century vibe. My personal favourite is Let’s get Loud by Jennifer Lopez, the celebratory last track which wraps up the musical beautifully, getting together all characters for a joyous performance.

RECOMMENDED: ‘Mismatched’ review: Why I don’t regret watching it | A Netflix Series

As far as the performances go, Camila Cabello’s debut as Ella is good. Though, again personally I am inclined to think that she somehow couldn’t portray across the delicacy and finesse of character that was original Ella’s forte. Prince Robert played by Nicholas Galitzine again fell a little flat as far as the chemistry between the prince and Ella was concerned.

I also felt that Pierce Brosnan as King Rowan and Minnie Driver as Queen Beatrice should have had a more substantial role in this retell as their camaraderie was not only endearing to watch but relatable to the perspective of the retelling too. Likewise, I wanted more of the ‘Fairy Godmother’ aka Billy Porter, another performance which I wish was more detailed upon to give more color to the narration. Idina Menzel, as Ella’s step mom was wickedly enchanting and also what had me pleasantly surprised was the humane, emotional side to her personality depicted which is surely going to strike a deep chord with the viewers I feel.

What came as surprise packages for me were in fact Princess Gwen, the Prince’s sister as well as Ella’s step sisters namely Anastasia and Drizella. Particularly the scene where Ella tells her sister that it hardly matters what she or anyone thinks about how she appears, It is more important that how the lady personally feels.I feel it not only shows a positive, unconventional tete a tete between Ella and her step sister but is a stereo type breaker of sorts comparing it to the traditional fable.

Overall, the movie is colourful, entertaining, enthralling and most importantly attempts to address a major societal stigma which has been ignored long since.

A fine watch not to mention the foot tapping music. Go for it for a refreshing new spin off on the timeless classic. You shall surely relate to the ideologies and the humor if somehow you don’t connect to the chemistry.

Hope you enjoyed reading our view on Cinderella Movie Review: Camilla’s Candour fails to restore the sheen of Glass Slippers in the latest Amazon Prime exclusive