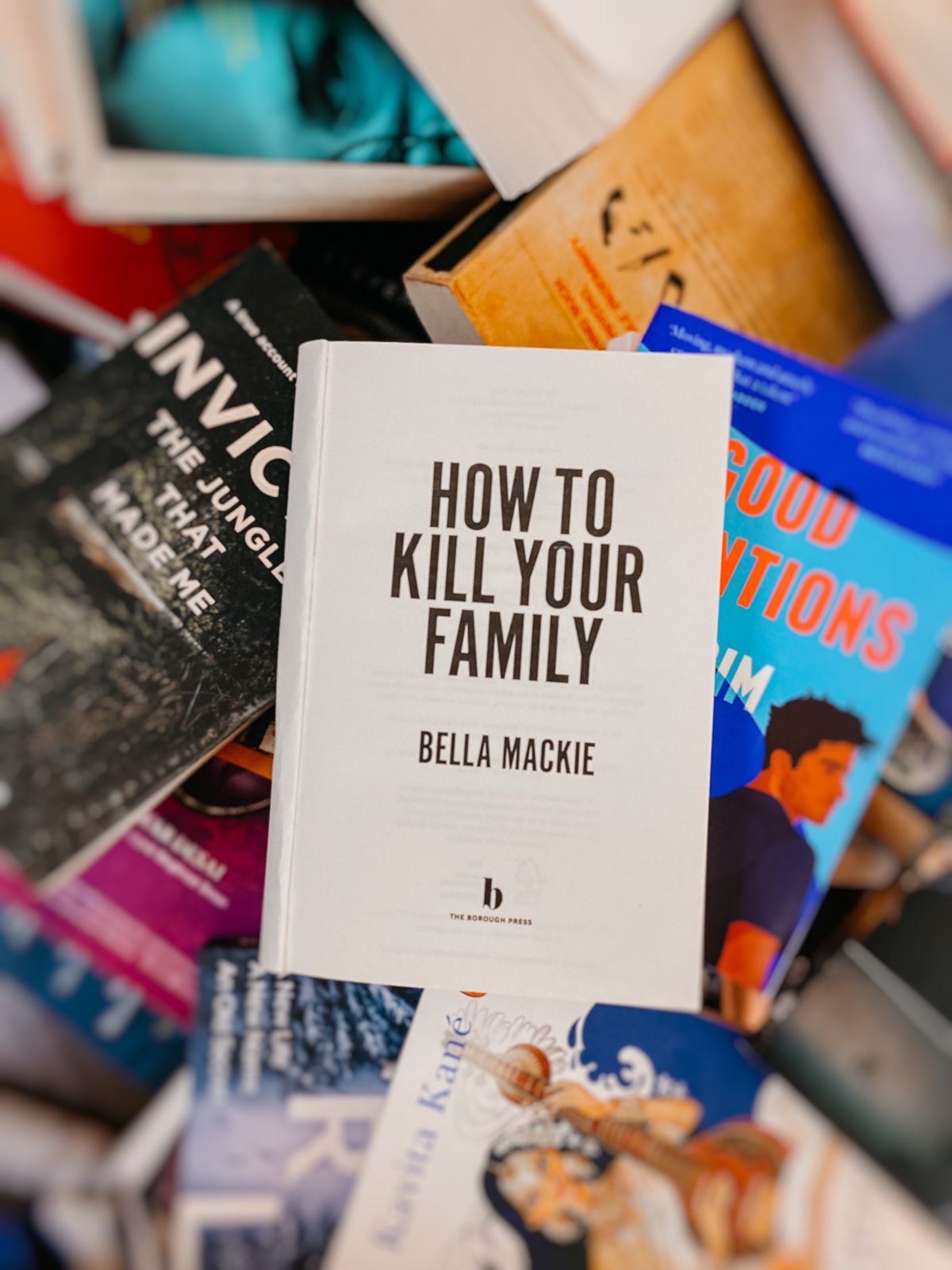 A cringe-worthy yet delightfully, the diabolical story with dark humour and a snarky sort of feeling to it, meet Bella Mackie’s latest How to Kill Your Family, Grace Bernard a character who shall leave you unsettled yet compelled in a manner of sorts.

Ok, let me be completely honest with you guys. I was simply appalled and yet some part of me was inexplicably attracted to this one, forcing me to pick it up and read it.

At first, I thought that this one will simply turn more into a character sketch of sorts, you know the kind where Grace is portrayed as funny, a witty vamp, an anti-hero of a kind and generally a detestable creation. However, as I delved deep I realized that not only was the entire scenario portrayed in a make-believe facet, but in spite of being a unique narrative, this one was fresh thanks to the absence of the usual domestic drama vibes.

So, coming back to the story, definitely black humour I’d say, with entertainment and wit loaded enough to promise you hooked, Grace Bernard the prime character who is in prison is unhappy since she has been convicted of a murder of which she is innocent. Well, not entirely as she is guilty of other things, including murders of her 6 estranged family members which she seems to have gotten away with easily, on the contrary. The reason for this is hate which has sprung up as a result of the fact that her father rejected both her and her mother too. This has resulted in her getting obsessed enough to plan the most perfect meticulous revenge, by carefully identifying and marking her targets as well as plotting different means and methods to kill them and seek the desired revenge. To find out what happens next you shall have to pick this one and read it.

I liked the fact that Grace’s point of view which has been so candidly laid across by means of a journal is entertaining at times as well as informative and somewhat intimidating too. Reading about why and how a person has chosen to “do away” with his /her family could be a bit unsettling yet Mackie has managed to keep that tonality subtle enough for the reader. In fact, I kind of fell into a pattern of sorts, reading and keeping stock of her murderous exploits which as such were tiny episodes of thrill unto themselves, each worthy enough of being converted into a separate mini thriller itself. In fact, throughout the narrative, I strongly felt that this one had all the potential of being converted into a series.

As far as the personality of Grace goes, seldom shall you come across a villain so entertaining, engaging and yet one whom you would surely want to resonate with, at the end of the day. I mean, there came a phase where all I was interested in were the ensuing murders and how she proceeded onto each, waiting for the next one with excitement. Strange, but it is a fact!

The narrative in the format of a tells it journal was an exciting experience to read albeit there was repetition at some places and even a little lowly dip in the interest factor at some points.

Ok, agreed she may not be worthy of sympathy yet Grace’s character is one which is for me at least, one of its kind for reasons more than one. I know you guys will be like she is a psychopath for Christ’s sake, who plans and shares gory details for such things? But, to me, she felt relatable, alive and most importantly I could fathom and see through what she was used to portraying in the manner of a message.

Related: A Twist in the Tale – Sherlock and Devdas by Manav Vigg

On the flip side, a bit crispier editing could have made this one, even more, juicier I’d say. However, a brilliant story with beautifully conceptualized characters and execution nevertheless.

How to Kill Your Family

‘Funny and furious and strangely uplifting. Grace is a bitter and beguiling anti-hero with a keen eye for social analysis – even in her most grisly deeds, you never stop rooting for her’ PANDORA SYKES

‘I loved this book’ RICHARD OSMAN

‘I’ve struggled to recover my reading mojo since lockdown. This turned out to be the thing that sparked it back to life… Funny, sharp, dark and twisted, Grace is a character I found myself rooting for even as she committed the vilest misdeeds’ JOJO MOYES

‘A funny, compulsive read about family dysfunction and the media’s obsession with murder’ SUNDAY TIMES STYLE

So, hope you guys liked this review of How To Kill Your Family by Bella Mackie.

Do let us know in the comments below which other titles you would like us to read and review. Stay tuned for the latest in the field of entertainment, lifestyle, travel, food, fashion, tech and gadgets as well as all things bookish. Right here at Booxoul, India’s best book review and lifestyle blog.