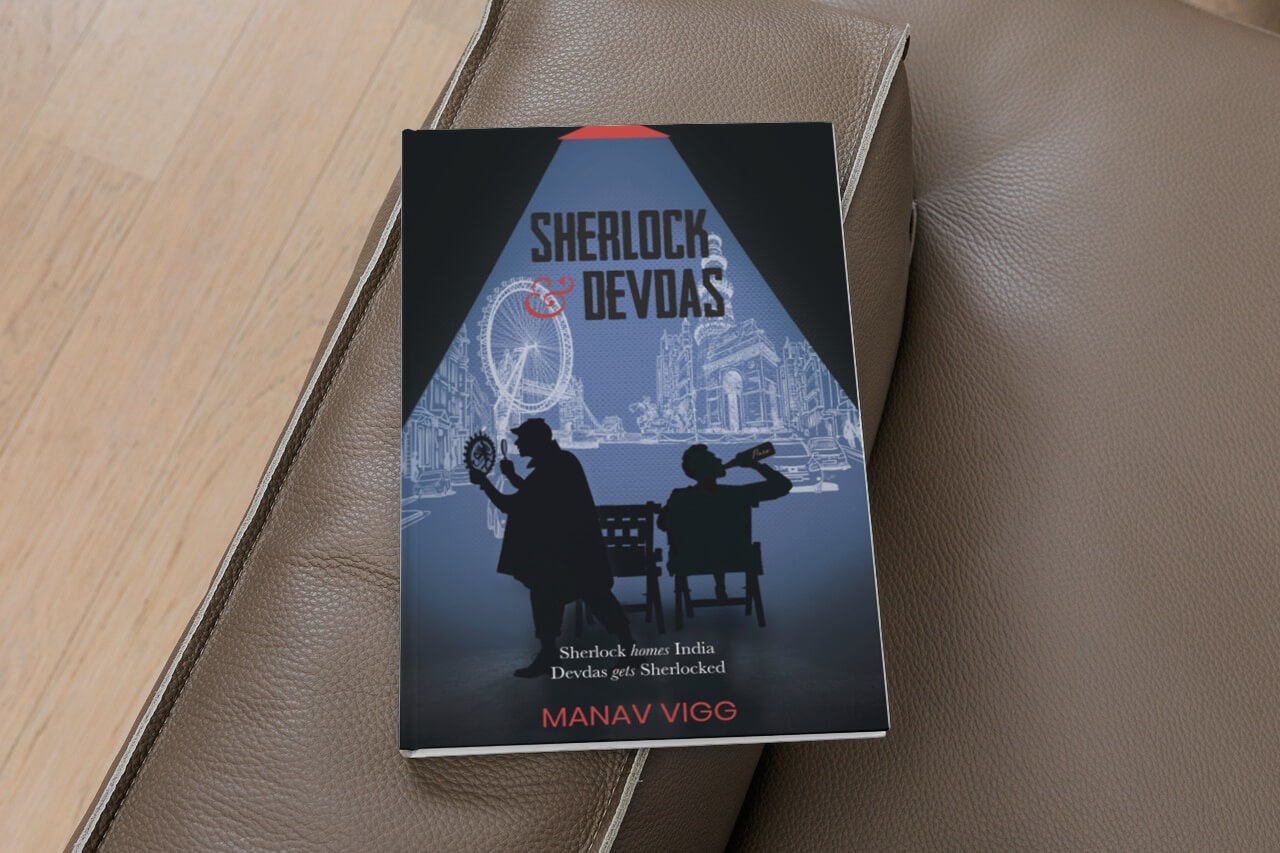 Sherlock and Devdas by Manav Vigg is a tale poised to amaze and blow you away to another level. An adventure confluence but retold, here is an epic amalgamation of 2 timelines which truly promise nothing but excitement infinite and unexpected twists and turns in a plot with multiple hues.

Say hi to the latest in the field of thriller fiction.

What if 2 of yesteryear’s stellar characters decide to confluence out in a manner you have never imagined before? Presenting Sherlock Holmes and Devdas in a tale upending your traditional approach to these, pushing you into a never imagined rigmarole

You know I have always felt that a thriller need not always be a pulse-racing, nerve-wracking, edge-of-the-seat kind of story always. For me especially, thriller happens to be that one genre which is the one with unlimited possibilities. That is because I sincerely feel every writer is blessed with their unique, independent style of writing and thriller as a genre can be a slow burn too, building up taking its needed duration, evolving in a manner which excites you, making you wait for the how more rather than the whodunnit sort of feeling.

So, tell me folks how do you define a tale with a modern twist on the legendary characters?

Simple. Sherlock and Devdas by Manav Vigg is a recently released fiction which fits the bill perfectly. The story shows us a fantastically conceptualised plot, creating a confluence whereby the characters of the likes of the legendary Sherlock Holmes, the detective cross paths with Devdas, the ultimate melancholic lover.

Stunned, aren’t you? Well, so was I. Looking at the title and the tagline alone, I was pretty much intrigued to discover more about this one. Imagine my delight when I found that true to its title this book was as off-beat an entertainer as it sounded in name to be.

This being a story which fuses 2 of those yesteryear characters which are highly unlikely to cross ever, owing to the different timelines and zones, Manav Vigg the creator for this one has illustrated a rare hypothetical circumstance- a story, where not only do these two meet up, rather they team up in a manner to pursue an art heist which is as fantastic sounding as the premise for the book itself. Whilst Devdas initially has qualms, way he, later on, gets together, as comrades in arms of sorts to help crack the fishy circumstances. Manav has ensured a huge iota of surprise element too, with this story.

Coming to the characters, each one of them, be it Chandni. Bhatia, Paro, Sherlock, Mycroft or even Devdas, Manav has ensured that they are laid down in a manner which is relatable yet refreshing enough to come across as something unique, portraying them in a manner never seen before.

Each character, for me always brings a particular hue, a particular spectrum, a different vantage to the story it is a part of. In this case, be it Sherlock, Devdas, Paro, Chandni, Mycroft or any other, each seems to have been interlaid so brilliantly that you cannot help but be blown away by the scintillating enigma of retelling a story Manav has put forth.

Sherlock, for a fact, has always been my favourite character. The way he silently exudes that fabulous charm, still managing to get to the crux of an issue and untangle its complicated threads has always had me mystified. Likewise, the character of Devdas who is touted to be the melancholic, failed lover has been a subject matter of intrigue to me. To see an amalgamation of these 2, in such a format has been a cool experience. The thrill, the mystery, and the complete whodunnit feeling add to the aura of the “unique” experience Manav tries to give us through an insight into the story of these 2 characters.

A great read, this one should undoubtedly be on your TBR if you are a fan of thriller, the mystery of another sort, different from the usual edge-of-the-seat thrillers.

ALSO READ: Enjoy reading the classic Bengali Crime Fiction Series Feluda? Then do read this book The Amateur Detectives to discover another such gem on the block

Hope you guys liked this review of Sherlock and Devdas by Manav Vigg. Do let me know your thoughts on retellings of this manner. On second thoughts, remember how Dev D which happened to be a retelling of sorts of Devdas was a movie many had lauded for its out-of-the-box, fresh approach. Ditto for Manav here.

The time is now. The occasion was never.
But some coincidences change your life forever!

Sherlock & Devdas were never meant to be together. They belonged to different worlds and nested different conflicts. Early in his crime-solving career, Sherlock is learning his way with deductions and is on the uphill path to his first big case. Devdas, on the other hand, is drunk and torn after Paro’s marriage, and is on his downhill path to self-destruction. But one unexpected event shook their worlds and brought them together.

While Sherlock would have loved to prove himself as a detective alone, there are things known only to Devdas about the stolen artefacts.

A modern twist on the legendary characters – Sherlock & Devdas pairs two completely opposite yet eccentric personalities in an epic adventurous journey.

Manav’s debut novel ‘Confused Bastards’ revolved around the world of start-ups and has received starred reviews from book reviewers & readers alike. He has been a Fellow at the “Mumbai Mantra CineRise Screenwriting” programme and the Event writer for the 45th International Film Festival of India, Goa. Sherlock & Devdas is his second novel.

Stay tuned for the best in the field of entertainment, lifestyle, travel, food, fashion, tech and gadgets as well as all things bookish. Only here at Booxoul, India’s leading book review and lifestyle website.