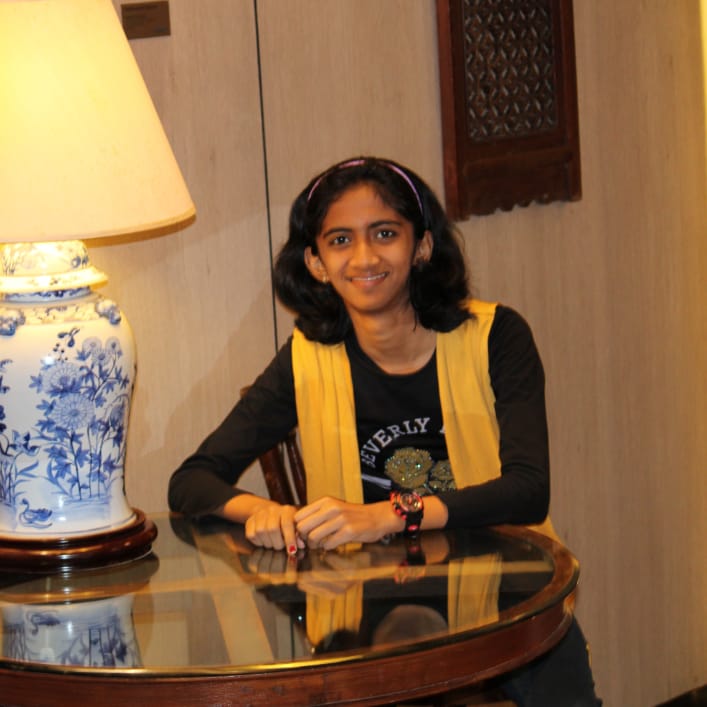 Do you believe in the Ramayana and Mahabharata? Well, here is an Author who does and will make you surely share her perception for the same. Presenting Vaishnavi Anantha, Author of The Jaz Gang Series.

Do you believe that creativity is a pursuit which is only fit for age-appropriate? Is writing an aesthetic skill which comes naturally only to those who are mature enough in the form of an excellent spurt of writing?

Well, I don’t think so as I strongly believe that writing is surely a talent which is definitely a divine gift too, somewhere as many a times, quite a few writers have been surely blessed with the power of the written words.

This is exactly the case scenario with my teen Author in the spotlight today – Vaishnavi Anantha, a youngster barely 15 years old and a 10th grader from Hyderabad who is already a successful and established Author. She is writing a four-book series The Jaz Gang Series on a brilliantly fascinating theme with 2 of these 4 books having been already published.

When I first came had an interaction with this mini powerhouse of talent, I realized that there was more to what meets the eye as far as her vision and writing prowess goes. Ask her how she came about to be writing on a concept as powerful and enigmatic as the Ramayana and she fondly recalls how when she was young, she grew up listening to the tales of both Ramayana and Mahabharata from her grandma, revelling in the beauty as well as the vividness of the story. As she grew her mom slowly but surely taught her how Ramayana was not only about Rama defeating Ravana or about Rama’s upgradation to being worshipped as God, rather it is also a strong teacher of the values of sacrifice, discipline, family, love as well as all those deeper aspects of life which are equally indispensable. At that time, she gave me such a candid insight shared by her mom related to Ramayana that I was bowled.

Vaishnavi said that her mom always feels that even though Lord Rama was a normal human being like us he became extraordinary and achieved impossible feats in life, thanks to the principles he followed. Thus, imbibing the qualities of Lord Rama as also Sita should be one of our strongest life motives she feels. Was really impressed by the way in which at such a tender age, Vaishnavi seemed to harbour such immense clarity of thought.

Vaishnavi also candidly admits that she truly believes that surely Ramayana and Mahabharata were real and not just fables. They existed thousands of years ago, an exceptionally advanced civilization that surely dominated the world at that point in time.

Ask her how she thought of mixing ancient mythology with a futuristic perception and she specifies how teens like her are pretty curious to know about the rich past and culture as also History in a manner in which they would enjoy reading it.

People often argue that one needs to stop dwelling on their past and look toward their future. However, Vaishnavi has a much more powerful point of view on this one as she truly believes that it is one’s past that shapes one’s thought process and future. Thus, one should surely know more about their rich past and heritage and do whatever they can to take it forward.

Ask her whether she always wanted to be a writer and she denies it. “Not in my wildest dreams did I ever think or imagine that I would become one and that too write a novel that would be a four-part series.” She kick-started the process of putting her ideas on paper one fine day and aided and guided through on this path by her mom, proceeded to create one of the most gripping pieces of children’s fiction I have seen in a while. The Jaz Gang Series in the title refers to the three main protagonists of the book namely Jay, Archie and Zenisha.

Ask her whether this book is only suited for children and she replies “No. Even parents can read alongside their children and enjoy these, thanks to the varied elements of fantasy, adventure, history etc she has added to the story.

Ask her about her favourite Authors and she quips “Carolyne Keene, William Kamkwamba and Sudha Murty.”

A YouTuber too apart from being a teen Author of The Jaz Gang Series, Vaishnavi loves travelling to historical places too. She idolizes her parents and her role models include Shri Narendra Modi Ji, actress Kangana Ranaut and Arnab Goswami. Truly a powerhouse of talent, join me in wishing super success to this stupendous teen today at Booxoul. Stay tuned with us for the best in the field of entertainment, lifestyle, tech and gadgets, fun, finance, education as well as all things bookish. Leaving you with one of Vaishnavi’s favourite quotes today:

All birds find shelter during the rain but the eagle avoids rain by flying high above the clouds.