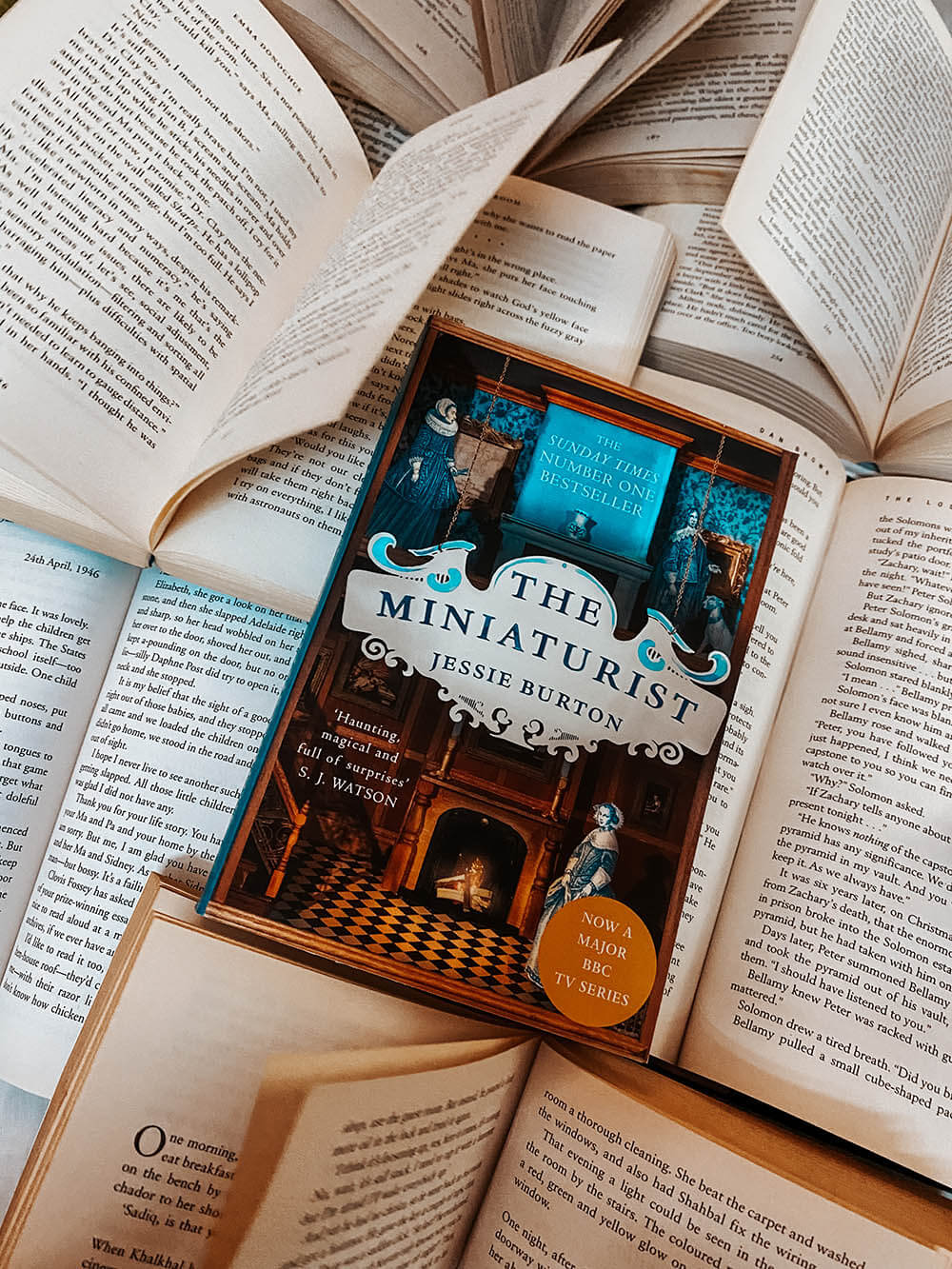 Book review of The Miniaturist By Jessie Burton

The phenomenal number one bestseller and a major BBC TV series. Winner of the Specsavers National Book Award and Waterstones Book of the Year. A Richard and Judy Book Club selection. There is nothing hidden that will not be revealed… On an autumn day in 1686, eighteen-year-old Nella Oortman knocks at the door of a grand house in the wealthiest quarter of Amsterdam. She has come from the country to begin a new life as the wife of illustrious merchant trader Johannes Brandt, but instead, she is met by his sharp-tongued sister, Marin. Only later does Johannes appear and present her with an extraordinary wedding gift: a cabinet-sized replica of their home. It is to be furnished by an elusive miniaturist, whose tiny creations mirror their real-life counterparts in unexpected ways…
Nella is at first mystified by the closed world of the Brandt household, but as she uncovers its secrets she realizes the escalating dangers that await them all. Does the miniaturist hold their fate in her hands? And will she be the key to their salvation or the architect of their downfall? Beautiful, intoxicating and filled with heart-pounding suspense, Jessie Burton’s magnificent debut novel The Miniaturist is a story of love and obsession, betrayal and retribution, appearance and truth.

Sometimes we come across suspense which breaks the usual rules of thrill and intrigue and decides to glide over to a territory that is much more resentful yet so exotic and exciting that you cannot help but be swept up in the charm of its dark demeanour. That feeling at that point of having dived deep into the dark and yet emerging unscathed, albeit shaking with uncanny wonder, is absolutely fascinating.

So, I just finished The Miniaturist today by Jessie Burton, and I must admit that in spite of me having felt like drifting away from it several times, there always seemed to be, at that exact moment, something on the page I was on, some tangible reason to keep me hooked on to it, making me peruse it right until the end.

Secret after secret kept popping themselves into this fascinating tale where there is an obsession, there is betrayal, there is retribution, and then there is also extravagance, outrage, gilded ostentation, frustration, and disappointment. This is a story that takes place in Amsterdam in 1686. It is a tale of Johannes and Nella tracing their journey alongside each other, encapsulating their passion as well as their aggression towards each other, perusing the finely abstract woven threads of a relationship between an emotionally unapproachable husband and a helpless wife who seemingly has no power of her own.

Johannes gets a present one day for Nella – a cabinet house, which is an exact replica of their own house, miniaturized and unfurnished. Having been expected to fill this one, she resentfully sends out for custom-made pieces to fill it with little tell tales that are more like her own passive aggression spiking out in retort to being a wife having no power of her own, feeling akin to an ostensible lack of trivial importance. What, however, ensues following this short-lived stint of her self-solaced triumph is unthinkable as unordered pieces start arriving for this miniature, eerily accurate, as well as in tandem with the happenings of the house in actuality, along with being poised uncannily to even predict the future.

As secrets are discovered and mysteries unravelled, Nella begins to learn how to navigate this rigmarole and be her own true self. Atrocious as well as beautiful at the same time, read the book to discover the completely addictive tangent it harbours.

The main plot pertains to a story more concerned about honour. I would call this a very well-crafted plot, a true-to-ground approach to life in Europe in the 17th century. A truly unflinching narrative, taking a stark stand in portraying the lives of those who are seemingly weaker in power and position, aka women and homosexuals, as well as those “dark-skinned” people who thrive and try to survive amongst those who are in power personified. Nella, for me, was that true narrator, embodying the persona of the typical heroine who is naive, inexperienced, and yet also smart as well as broad-minded. Yes, the startling contrasts portray the true essence, which is utterly relatable even to the modern readers of today who still enjoy reading a drama unfold in a classic manner with unexpected twists and turns, albeit for me personally, quite a few were predictable enough. It’s great writing, though, with beautifully crafted characters and a plot poised to intrigue the reader right until the last page. A conventional story yet wrapped up in period drama garb, this one is both universal as well as relatable. Be it Nella or Johannes’s character, each one presents a hue which is wondrous as well as intimidating.

Overall, I’d say this is a drama you will enjoy and also empathize with. A startlingly superb debut, one many readers would be willing to get invested in.

Related: Judging The Book By Its Cover? Gourav Mohanty Unravelling The Art Of Book Cover Design For His Title Sons Of Darkness

So, I hope you guys liked my book review of The Miniaturist by Jessie Burton.

Let me know which other international titles you would like me to read and review and I would be more than glad to do the same. Stay tuned for the best in the fields of entertainment, travel, food, leisure, fashion, finance, and all things bookish.