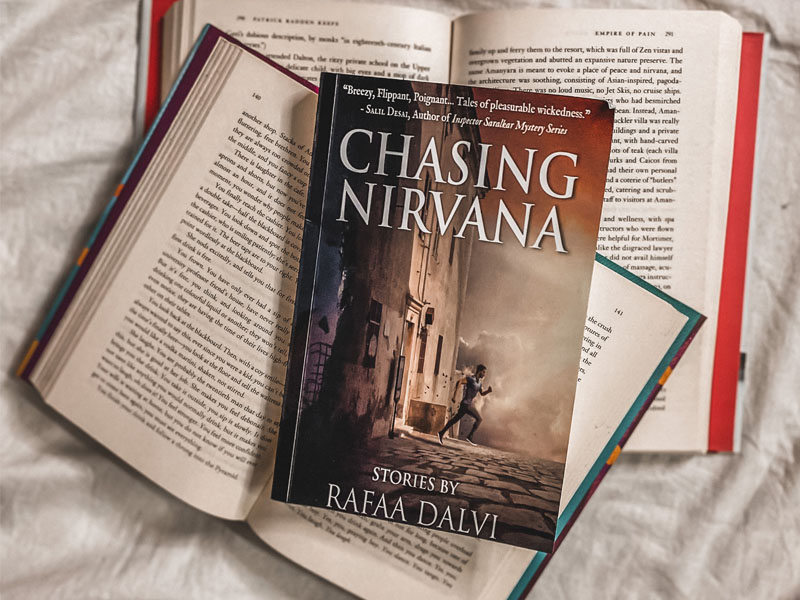 Short fiction seems more targeted- hand grenades of ideas if you will. When they work, they hit, they explode and you never forget them. Long fiction feels more like atmosphere; it’s a lot smokier and less defined.

Come tigers with your paws

I have my thorns.

His stories are soothing, yet scintillating, motivational and magical, exploring the macabre and the supernatural, with a gentle mix of the common and the special.

Witness the rise and fall of a rock legend, a cat-and-mouse game between a cop and a serial killer, and the last meeting between two lovers.

How far would a person go to understand a criminal’s psyche?

Can someone find their soulmate through a one-night stand?

What plan does an author hatch to punish the literary agent who rejected his manuscript?

In this book are stories for every season and every reason. The heady mix of human depravity, humour, satire, tragedy, revenge and drama makes these stories an essential cocktail of emotions.

Indeed, the above words by Paolo do complete justice to short fiction which seems to have transformed majorly in recent times being even classifiable into many subsections today. Flash fiction, one of the same, constitutes a short story with a limited yet relatable plot and character development. The basic idea is clear-maintaining brevity and hitting it hard, sometimes with a twist in the tale.

Our title in review today, Chasing Nirvana by Rafaa Dalvi, surely is one of those very strong contenders of flash fiction which promises to fulfil “Less is more” and very viably so. An anthology of 52 short stories ranging from romance, science fiction, dark humour, drama to more intense ones, this book promises to pack a punch within its ensemble.

ALSO READ: Book Review of Forever Mine by Swapan Karmakar

What really kept me hooked on it was the fact that almost every story either had an unexpected twist or a surprising ending to it. Considering the diverse range of emotions it explores, Rafaa has managed to keep us spellbound throughout hands down.

Be it his immaculate writing style or his exquisite character portrayal, his style comes across as a powerful and engaging one, having perfected and honed from experience. He surely comes across as a master narrator and storyteller as far as the genre of flash fiction is concerned.

Having many accolades and recognitions to his credit, Rafaa still manages to keep me enticed with his refreshing writing style as he strives to stick to the “Small is Big” ideology he swears by and follows, literally i.e having book series of this name.

Pick any tale at random and you shall be transported to the world of its characters, delving into their pleasure, basking in their glory, experiencing their personal trauma and a slice of their life. And all of this in the twinkling of an eye. The most indulging and immersive part about his stories is that the characters he creates are so uncannily close to life that they could almost pass off as an acquaintance you know for ages. With a bewitching sense of narrative which is not only impactful but also wicked in a pleasurable sort of way, Chasing Nirvana has the potential to linger and stay upon your mind long after you have finished reading it too.

Some writers are surely gifted with the art of amazingly potent storytelling and Rafaa is surely one of those. You shall be transported through a gorge of emotions, threatening to amaze, startle, shock, surprise, entice and wind you up at the same time. The expansive plethora he has managed to put across through his narrations, all rolled in one single book can easily be considered as one of the best short story /flash fiction anthologies I have read in a long time.

The bold tonalities used by him in some of the stories might be a bit of a culture shock thingy for some conventional readers. Although, I realize that is simply the writer’s way of putting across the realities existent in our society today in their true blue, stark form.

Many of the stories in this anthology are my favourite. Be it Chasing Nirvana, lying on the couch, Five stars, The funeral, The masks we hide behind and most of the others. Rafaa lends a voice to social messages he wishes to deliver in a subtly immersive manner, focusing more on what has been happening, leaving the reader to reflect and muse on what needs to be the solution of the same.

Surely, there are stories for every season and every reason as it has been propagated for this one.

So, what are you guys waiting for? Go ahead and dive headfirst into this cocktail of Human emotions that is surely the Literary Sucker Punch of the year!!

Hope you like the book review of Chasing Nirvana Rafaa Dalvi. Do let us know what you think in the comments below.