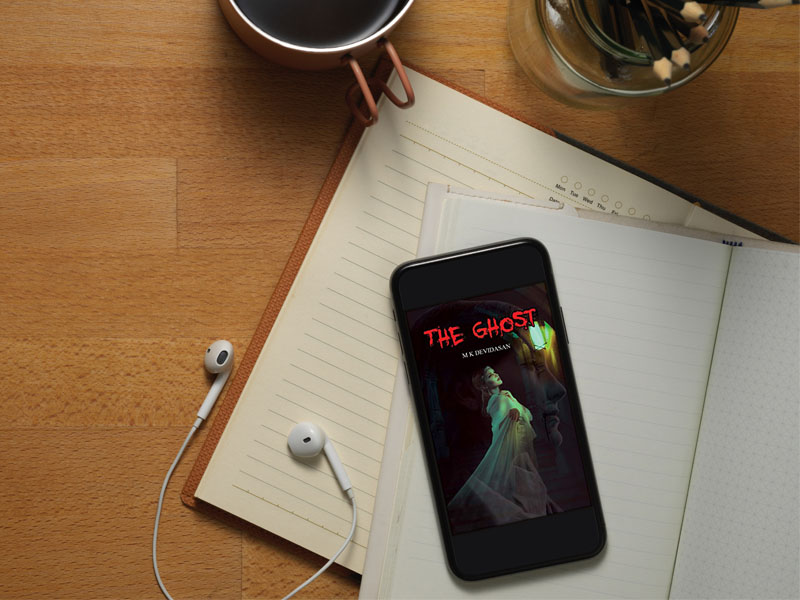 There is a ghost here. A lonely spirit. The ghost of everything that could’ve been and never was.

Shaji, an IT professional and only son of a wealthyMuslimlandlord, helped Sujatha, a Hindu girl, by taking money from his father’s locker towards the capitation fee for her engineering college admission in Bangalore.  The indebted girl pawned her innocence for his lust. Raju, a classmate of Shaji, who was in the porn business, had an eye on this beautiful girl with frequent mention to Shaji, who never agreed. Once during her visit to the village, she went missing. Gossips went around blaming Shaji for killing and disposing of her body. On his visit to town to prove his innocence, the police arrested Shaji and tortured him to the point of his hospitalization. The ghost of missing Sujatha appeared to save her mentor and saviour, and Shaji was released. The cause of the death was a mystery which she revealed with an unexpected thrill and suspense.

A mystery suspense novel that will keep you enthralled on thorns till the end.

Indeed, whether ghosts are existent in reality or whether they are simply figments of one’s imagination has been a debatable issue for ages now. Eyewitnesses swear they have seen spirits and also experienced them do the unthinkable. Generally, if we were to go by pure historical facts and proven theories, spirits or ghosts are something that just does not appear out of anywhere one fine day. They come back without moving on to the next dimension simply because they are possibly distressed in some manner because of something. There could be some kind of an incomplete karmic balance or unfulfilled task or wish of their life owing to which they find it difficult to move on to the next.

Our title in review today, The Ghost by M K Devidasan is horror fiction. Written in the usual thrills and chills kind of format, the story revolves around Shaji, Sujatha and Raju and their tangled lives. Trouble ensues when Sujatha goes missing. The entire village gets abuzz with rumours blaming Shaji for having killed and disposed of her body. On his visit to town to prove his innocence, Shaji gets arrested by the police and tortured to the point of hospitalization. This is where the mystery and horror starts. Read the book to find out the complete story and understand the thrills and also find out the bone-chilling suspense in the story.

Illustrating the village life of the people of Kerela, this one also highlights the Hindu Muslim Caste disparities that have been prevalent for ages. The Author has taken a good effort to also shed the light on the social stigma that surrounds our society not only with regards to the caste systems prevalent but also the class system where the upper and the middle class are the only ones who love and live as per their discretion whereas those who form the lower class are the ones who bear the brunt of all inequality and injustice. Alongside, he has woven the element of horror too, very well in the story, not only maintaining the thrill throughout but also ensuring you remain in the mystery and suspense as regards the outcome of it all till the very end.

Though, I would personally like to point out here that a finer, more crisper editing would have done wonders and taken this book ahead of a very long way into becoming an even more enthralling read. Albeit the basic plot core idea is good and the writer has also tried to do justice to his point of view with regards to not only the handling of the narration but also the execution of the story’s key facets. The village picturesque scene depictions shall surely transport you to a sweet Kerela, full of coconut trees and mesmerizing scenery. The language used could have been done with a bit of fine editing as well as the correct usage of Grammar could have gone a very long way into establishing the strength and efficacy of the plot even better, I feel. Else, the feel, essence as well as core idea is good and also the characterizations are well done. The suspense build throughout is a strong point of the book.

Overall, a good attempt and I am sure the Writer, with a fine bit of nudge in the right direction with the correct and crisp editing, will do more justice to his writing.

Looking forward to more writing attempts by Him.

Hope you like the book review of The Ghost by M K Devidasan. Do let us know what you think in the comments below