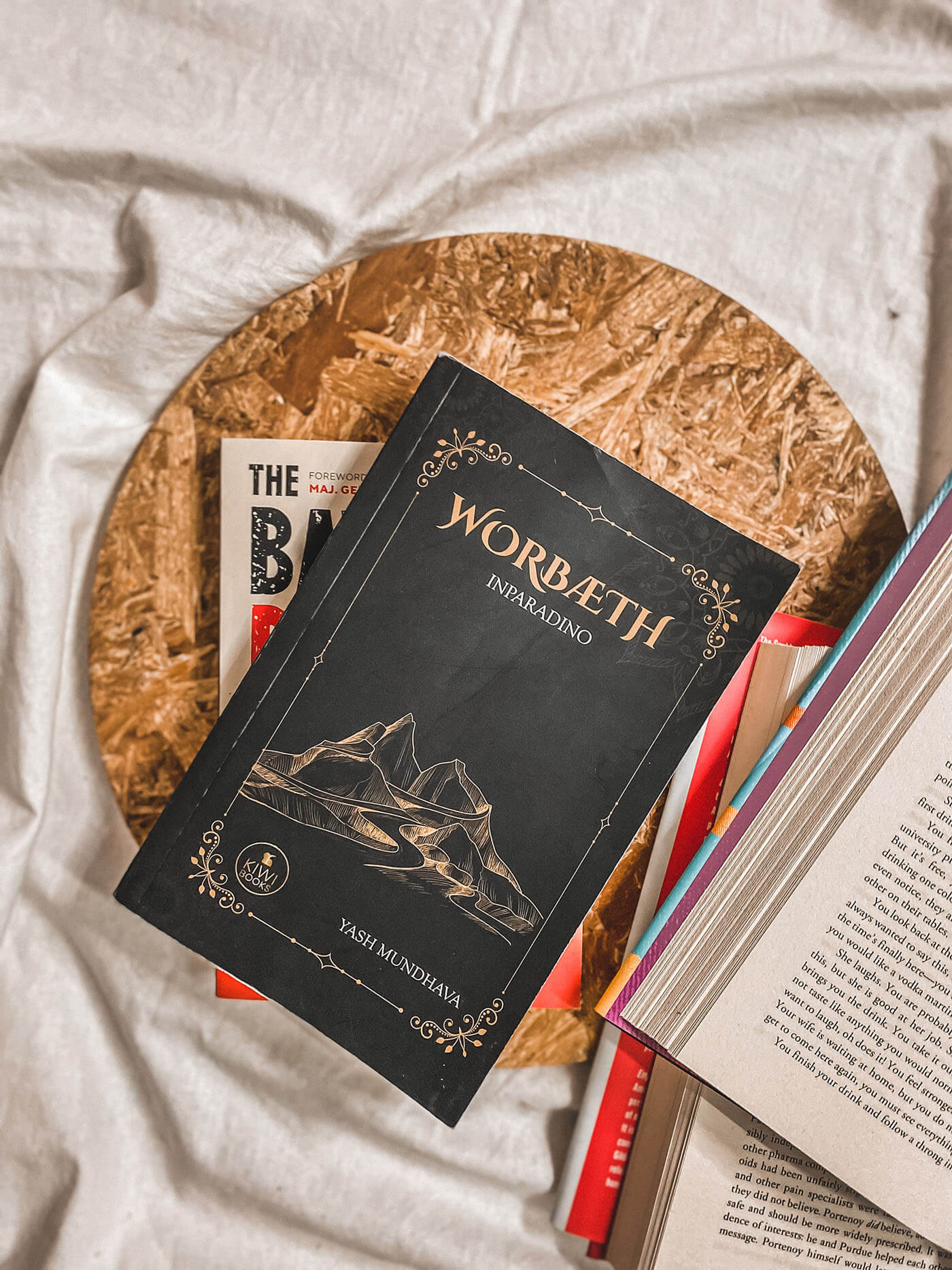 ‘Hang between being good and evil, invisible he chooses to be both for the world that he is about to reshape…’

The Creator is the ruler of Worbæth and a caretaker of Klopin Brothers whose family are in a grave he dug. He tells them nothing about it but divulges them the knowledge of Worbæth in their sleep and bids them a stone to put in the heart of the temple he is ruling. Therefore, destroying the orphanage they call home under the ground, Irona’s three offspring venture to find the desert’s temple in order to meet their mother. But a teen, Oud L. Fown, knows Irona is dead, leaving a strange suicide letter that he has to decipher.

Indeed, this quote by Michael Scott does immense justice to our title in review today, Worbaeth Inparadino by Yash Mundhava. As intriguing as the name, the premise of the book is equally novel and unique. Mundhava, through his writing, has attempted to take us through his fantastically created concept of Worbaeth which is a blend of fantasy, philosophy as well as humour, sci-fi, as well as mystery. Attempting to establish a connection between the spiritual and the cosmic world, he has managed to create a huge universe that not only succeeds in entertaining the audiences but keeping them awestruck, thanks to the larger than life characters, the well-detailed plot, the intricate detailing created as well as the meticulous character as well as situational creatives Mundhava inputs in this piece of fantasy.

The Creator, who is also the caretaker of Kloptin Brothers, whose family grave he had dug, divulges them the knowledge of Worbaeth whilst they sleep and bids them a stone to put in the heart of the Temple he is ruling. Then proceeds the plot with an intense, mysterious yet breakneck speed following their pursuit as they set about to uncover the truth behind the mother Irona’s suicide, who had incidentally left a strange suicide letter behind to be deciphered.

Not only is the plot and premise richly detailed but Mundhava manages to keep the readers hooked on with his vivid imagination and riveting plot twists. The gait of the book is good and so is the balance between maintaining the right equilibrium between elements of fantasy, mystery as well as fiction.

I have always been a fan of huge canvases. I mean richly detailed plots, well-defined characterizations, out of the box ideas as well as concepts that fascinate as far as sci-fiction and fantasy are concerned. Yash’s book surely fulfils those requirements and also ensures that the readers get a glimpse of a world which though surreal, appeals to their better sense and keeps them excited and intrigued. Not only is the power of his imagination supreme, but he has ensured that the canvas which he has so painstakingly created comes across as a perfectly synchronized and streamlined narrative, one which transports you delightfully to another world.

Although claiming that his work is based on his subconscious sense, Mundhava’s writing surely comes across as not a haphazard jot down, rather as a meticulously created vision that he has penned with intense skill and craftsmanship giving reasonable justice to this debut piece of writing endeavour by him.

A good first attempt and an entertaining read for readers of fantasy and mystery.

I hope you like the book review of Worbaeth Inparadino. Do let us know what you think in the comments.