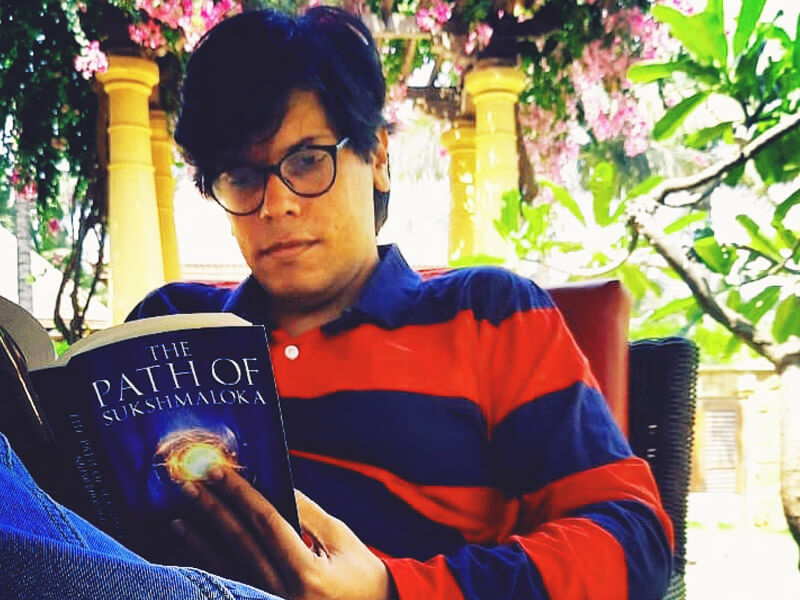 Well, it’s a thought-provoking story, to say the least. Hence, it caters to audiences across various genres even though the primary genre is dark fantasy.  Many youngsters who read the book and were gamers told me they enjoyed the RPG like action in the Dharmayodha story arch. The fans of Indian epics, appreciated the book for the various references of Mahabharata. The literature lovers enjoyed the narrative and the character-driven story. So I guess, The Path Of Sukshmaloka is a book that is a very unique story that spans across genres and offers very interesting elements.

That’s fascinating and so true. Speaking of interesting elements, the book traverses into many unconventional areas, with the dystopian setting, concepts of astral dimensions and a secret cult of reptilian people. How did you come up with these fascinating concepts and ideas?

It took a lot of research. Apart from research it also took a lot of imagination and creative thinking. The biggest inspiration came from the Indian epics like Mahabharata and Ramayana. You see our existence is not governed only by Physics. There is more beyond the physical realm. Where the physical realm ends, the astral dimensions begin and these dimensions have control over our lives, more than we would care to admit.

That’s really deep. Did you face any difficulties when writing this?

Well, not really. The concept was clear and the ideas were coming in fluidly. But yes I did face many other personal difficulties and struggles that were not related to writing. Yet, I am grateful for those. For those difficulties made me pursue this book against all odds to give readers a story that will uplift them through their struggles too.

How long did you take to write this book?

I can’t recall the actual years. But yeah it took some time. I began writing way back in college and recently finished it. Just like every book, even ‘The Path Of Sukshmaloka’ went through its share of writing, editing, cancelling and re-writing.

Of course, every good story deserves time and given the depth of your book and well-sketched characters, it makes sense. This brings me to the next question; Who is your favourite character from ‘The Path of Sukshmaloka? What are your reasons for liking that character?

That’s a tough question. I guess it would be Harshwardhana. I think his struggle is phenomenal throughout the events of the book. He not only faces a massive challenge of performing his obligations as a Dharmayodha, but also faces several adversities in performing his role as a father.

Describe a typical writing day in your life.

It’s very simple. I sit in a bright room, keep my phone away, ensure there is complete silence and write away-sometimes even skipping my meals. On weekends, a finely creamy and frothy chocolate shake is the companion too (laughs).

That’s awesome. So on an average how much time do you spend writing?

That’s very relative actually. It depends on the state of mind and body. There are times I am fresh and pumped with ideas and there are even times when I am tired out.  During the latter times, I just take a break, fire up my PS4 or catch a movie on OTT platforms or simply read something.

Well, The Path Of Sukshmaloka’s highlight is even its exceptionally imaginative world. So I would like to ask you; how did you work that out and how much ‘world-building’ takes place before you start writing?

Yes I get where you’re coming from. ‘World-building’ is integral to the fantasy genre more than any other genre. Quite ironically, you may not believe me, but it happened after most of the story was complete. As many veteran authors often advise; world-building from the beginning, can turn out disastrous. There is no point if you build a complex world and your characters and their story is out of sync with the laws of that world. Hence, it’s a personal way of writing for me: I work on world-building at the touch up stage rather than from the foundation.

‘The Path Of Sukshmaloka’ shows immense potential for a sequel.  So in such cases what is more challenging as an author, creating the first book in a series or continuing the subsequent novels?

Both are equally challenging in their own way. While the first book comes with the adversity of crafting a world, story and characters, the next one demands fresh content while living up to the artistic message of the first one. But on the whole I guess the sequel is more pressurising; rather than challenging. This is especially true if the first book has gained a lot of acclaim. The author then has the pressure of ensuring that the sequel offers fresh elements and at the same time doesn’t lose track of the main thought behind the story.

I guess that’s quite agreeable. The protagonist of your book, Prithvi Sen is one of the most fascinating protagonists I have read of in Indian fantasy literature. If you had to describe Prithvi Sen in three words, what would those three words be?

The Path Of Sukshmaloka had a powerful and thought-provoking ending. What is in store for Prithvi Sen beyond?

There is massive journey for him. It will be filled with a lot of twists, turns, struggles and even conquests.

And now, the final question. Any tips for budding writers?