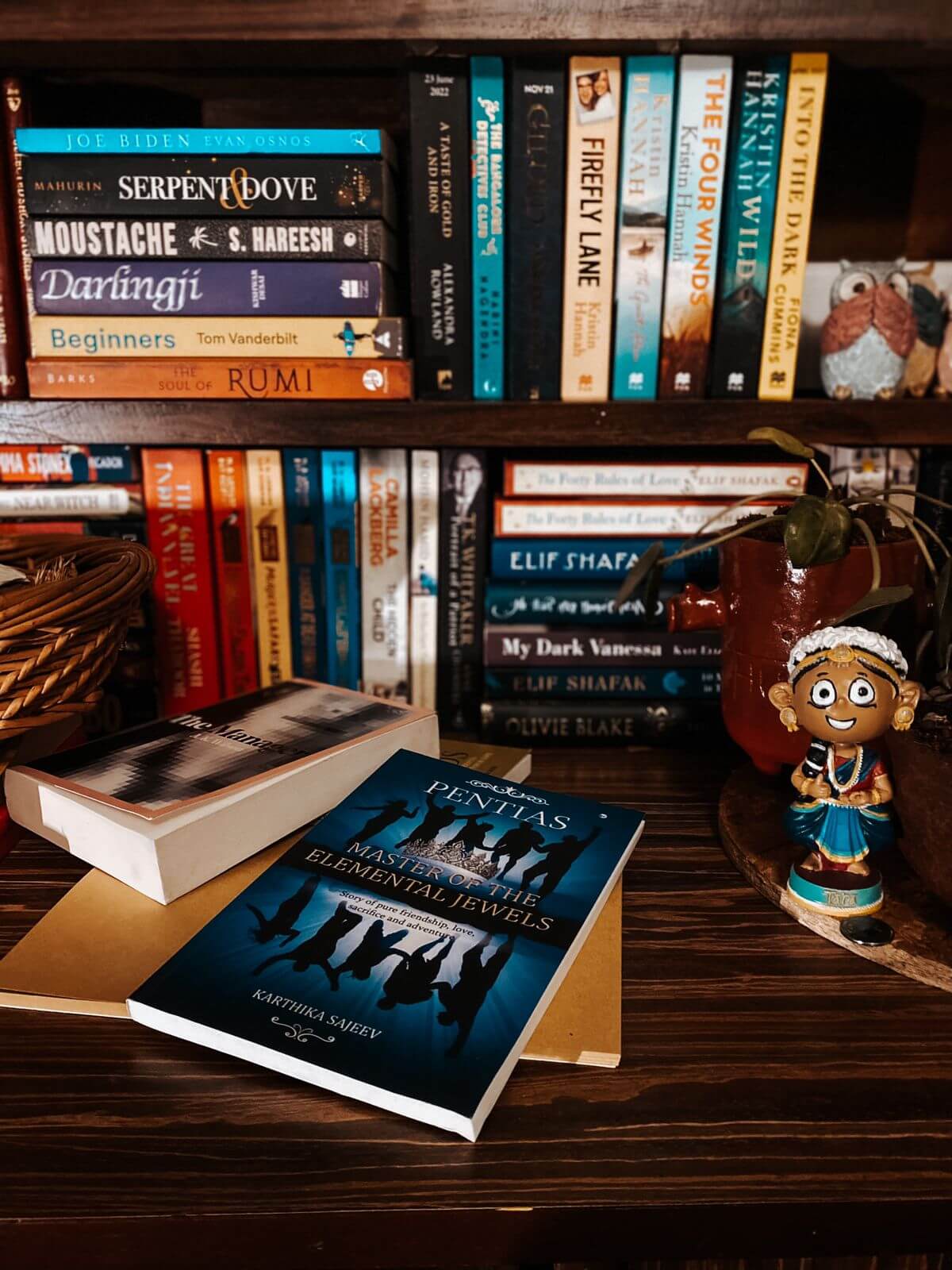 Book review of Pentias: Master Of The Elemental Jewels By Karthika Sajeev

Pentias: Master Of The Elemental Jewels

Aahan a 15-year-old teenage boy, gets disturbed by the recurring dream of the ghost of Mrs Laurels’ choking his six-year-old brother Aarav to death. On the next day of his birthday his father, Mr Mathur slips into a coma. His last words were, ‘This is my end…Please meet Mother Alaysia… We do not belong here…take your brother with you…open my gift son’. Who is Mother Alaysia? What was happening to dad? How did mother save us from Mrs Laurels’ ghost? His mother, dead long ago, and now on the verge of losing his father, Aahan only has so many unanswered questions in front of him. Aahan, Aarav, Dhyan, Farhan and Harshi, the Pentias set on a tour to find the answers which lead them to….’ where are we? What is this place?’ ‘Silandria is a place beyond words, beyond imagination, says Mother Alaysia, ‘You are the sons of the King and Queen of Silandria, Aahan you are the future King of Silandria’. With not much time to explore more about this new place that was claimed to be his birth-place, the Pentias now have to break a curse by finding the four lost Elemental jewels of Silandria to help Mr Mathur

“Fantasy is one such place that has the power to erupt into a full-blown universe right from a minuscule tiny grain of nothingness.”-Anon.

Indeed, fantasy fiction, especially if it encompasses action as well as adventure altogether, intricately weaving all together at once is a treat for readers who like to indulge in multiple aspects of any story, all at once. Yes, fantasy is that genre, for me at least which pushes the realms of my imagination to unsought lands, compelling me to dive into the mystique and unique pursuits which the writer of that work decides to splay across for readers. The hues which are portrayed across such a form of writing are classic evidence of how a book, with the sheer power of its words, can transport you back and forth from and to lands unknown, hereinto, those black holes that remain the core locus standi of oblivion undeterred.

A book I recently finished Pentias: Master of the elemental Jewels by Karthika Sajeev promises all of this and much more. A fantasy cum adventure fiction, this one will surely appeal to not only children but adults as well, thanks to its supremely intricate storyline. Beautifully written, this one is a multi-fold of mysteries with one embedded into another. Aahan, a 15-year-old, accidentally finds out that he is going to be the future ruler of a kingdom called Silandria. In order to save his father, he must embark upon a dangerous adventure to find the 4 missing elements of Silandria. Will Aahan and Aarav, his brother be able to solve this mystery along with their friends? Read the book to find out more.

I am glad that Karthika has managed to even imbibe concepts of friendship alongside splaying the mystery and mesmerizing brilliance of fantasy and magic. Not only will this story appeal to kids, but it will also equally cater to and satiate those readers who like reading and indulging in a multi-hued plot at once. Likeable characters, intriguing plot, fun, breezy gait all ensemble it out to a fabulous story, which only gets better with each series. I like the way mystery is woven alongside, seamlessly making its presence felt and yet the narrative makes up for an enjoyable read. Even though this title is the second in the Pentias Series, it surely qualifies for a stand-alone read too, I’d say. Karthika surely aims to build upon a higher, much more dense premise and take it to other unexplored heights as she proceeds with the main core of the series and is positive she will do an amazing job creating it flamboyantly.

Related: Exploring The Magic Of Roald Dahl’s Writing Through A Book Review Of His Best – Charlie And The Chocolate Factory

Adventure, love, friendship, magic, and sacrifice all piled into one, this is your go-to title for your next YA indulgence. Go for it if you like adventure, and magic and yet want to immerse yourself in a breezy read this holiday season.  I would so far as to go to dub this one the Indian “Secret Seven” or “Famous Five” which will slowly grow in its reader community. The premise is so vast and strong, that it has all the vitality of becoming a hot favourite in the genre of fantasy fiction. Anyways, I have always maintained that fantasy is one of the trickiest genres to create, build and expand upon. This is an excellent, creative in that direction by Karthika.

So, hope you guys liked my review on a book of this amazing Fantasy fiction – Pentias: Master Of The Elemental Jewels by Karthika Sajeev. Let me know in the comments below which other blogs you would like us to write and we at Booxoul, India’s best book and lifestyle website will deliver for you. Striving to get you nothing but the best in the field of entertainment, travel, lifestyle, food, tech and gadgets as well as all things bookish. Also, keep tuning in for more exciting and trendy content coming up very soon. Keep checking this space for more.