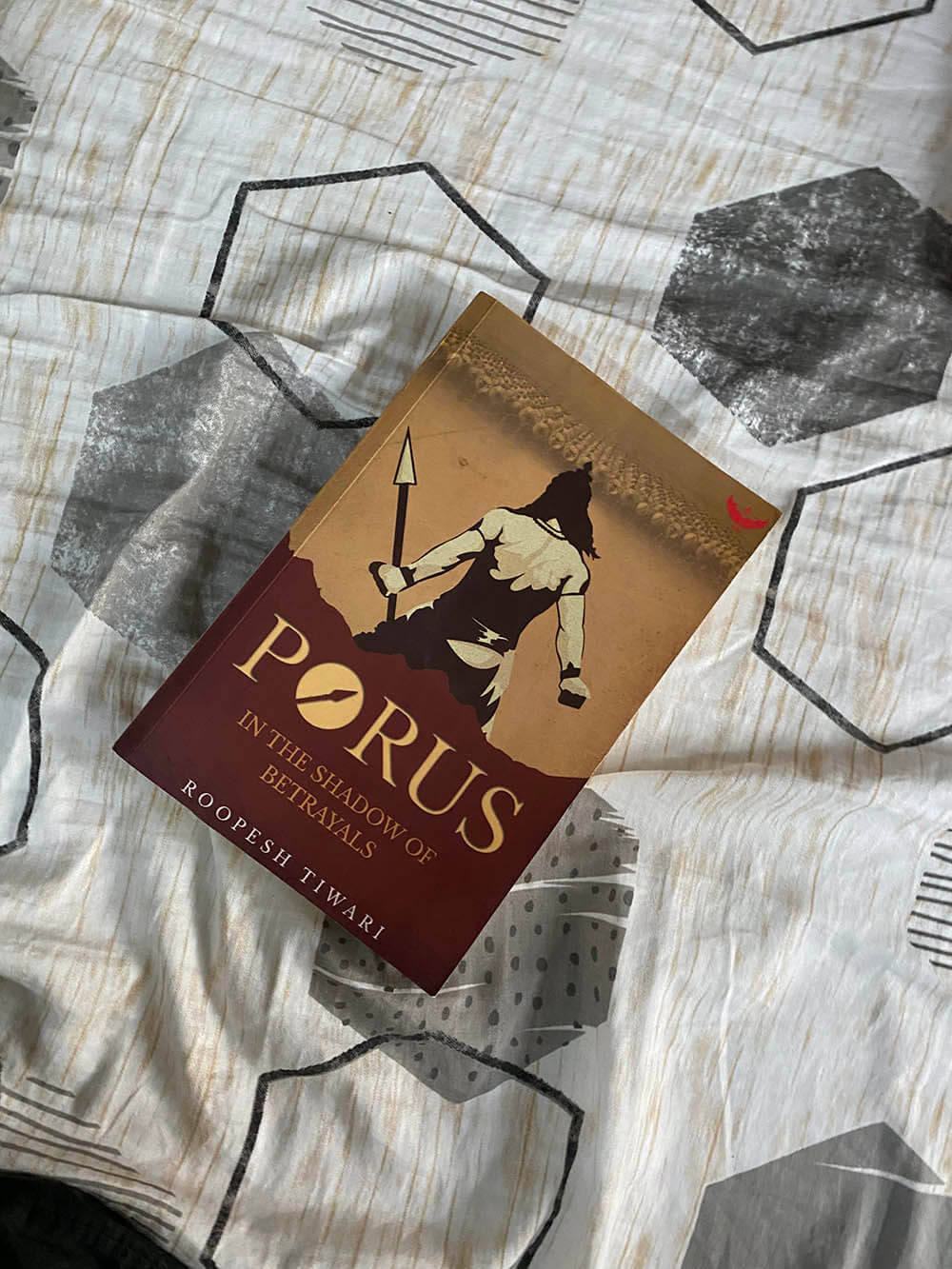 An amazing piece of historical fiction – Porus: In the Shadow of Betrayals by Roopesh Tiwari is the perfect confluence of historical fiction with an amazing array of characters – real as well as fictitious. With a sharp storyline along with magnificent world-building and great characterizations, this is the first in the series, providing a superb cliffhanger at the end, with the hopes for an even more amazing next.

History is usually the one which I am the most excited to read since I always feel it provides the maximum interesting facets of information and to tell you guys the truth is one of my favourite genres to settle down with is thus historical fiction since it provides an amazing confluence of history and fiction at once.

What happens when you get to read historical fiction which is an amazing fusion of research, fiction as well as fact and history both? Simple. A stellar piece of writing. Porus: In the Shadow of Betrayals by Roopesh Tiwari is a historical fiction which made me privy to a host of historical characters from Chandragupta, Alexander, Ptolemy to Darius, Altus and many others which I have been wanting to read and discover more about since long.

An amazing piece of fiction, this story captures diverse cultures covering Pataliputra, Magadha as well as Pella aka the capital of Macedon. The story covers 3 parallel tracks pertaining to Porus, Alexander as well as Chandragupta as the main characters albeit the facts have been tweaked to give a somewhat more sombre kind of aspect. I mean when a man who considers himself the son of God Zeus himself decides that he wants to conquer the whole world, what limits do you think he will go to conquer the world? Will he be ruthless enough, using his military power to its worst or is it possible to stop him from doing that? And even worse, what if someone decides to truncate this victory run of his? What repercussions will that person face?

There is Porus on the other hand who believes that patience is the key virtue to everything and that using one’s mind calmly can lead you to solve any situation.

Purshottam aka Porus, one of the main characters of the story, his family gets killed after the betrayal of King Nanda of Magadha. Although he manages to escape with his nephew Pinakin, his other nephew Vikrodhana, who also managed to save himself, gets separated from the family somehow in the process.

The story also pens about Chandragupta as well as Chanakya and also Nanda’s brother Darius and his wife, as also Pinakin as well as Taramati who happens to be his love interest.

Written brilliantly, so as to connect and weave all characters together seamlessly, Porus is a book that has surely been written after doing an extensive amount of research into facts as well as the history that has taken place in the past.  To connect and interweave all of them together seamlessly in such a beautiful tapestry is no mean feat and Roopesh has ensured that it is done perfectly.

This one being the first in the series, with many more to follow probably, Porus which is written with a brilliant gait, ends on a superb cliffhanger with more action being promised in the next of the series. I was gobsmacked by the way the cliffhanger knocked the wind out of my lungs, I mean so fast-paced and kept me on the edge of my seat always. Such a blink-and-you-miss-it kinda feeling.

What really amazed me was that in spite of there being a host of characters to cater to and describe and interweave together, Roopesh has ensured that each and every character gets his space in the narrative perfectly, the story goes on smoothly without a hitch, beautifully linking up all events, seamlessly joining the edges to form one huge larger than life narrative which is flamboyant and at the same time -believable.

Yes, believable guys because I sincerely feel that when it comes to creating historical fiction, especially beyond a point it becomes extremely tricky to handle multiple characters, the time-lapse, the generational swing as well as primarily a plot of such magnitude and stature. And nevertheless, Roopesh has ensured that be it in totality or even singularly, the story shines on along with every character beaming a different radiance, adding to the beauty of the story.

With excitement having been maintained throughout, it comes as no surprise that the summation aka the main plot is so magnificent that it promises to culminate into a piece of fiction which will surely turn into an epic serial adventure which will be highly pursued by readers of all genres alike, regardless of whether they are historical fiction readers or otherwise. With great language, superb narration, a sharp plot and amazing world-building and web creation, Porus is a story sure to keep you engaged for keeps.

Grab this one if you are a fan of historical fiction and want to read something which promises to be regularly splendid on a usual basis, with parts coming soon and brilliantly written. What I feel is also amazing is the fact that Roopesh has merged emotion, world-building, history, morale as well as a host of other things through this one, in spite of the fact that being a historical narrative there comes a limitation where you cannot tweak details beyond a certain level. And yet here comes a narrative which promises to be riveting and gripping in spite of its historical roots.

A great historical fiction read, bookmark this one, you guys. I must say it feels great to discover such a brilliant Author, realizing that yes this can be the next big name, the next gem of a talent, discovered and shining through his piece of craft.

Porus: In the Shadow of Betrayals

4 TH Century BCE. India is a volatile place. Macedon king Alexander has arrived, and his thirst for glory is unquenchable. A certain Chandragupta Maurya has decided to overthrow the kingdom of debauched Nanda and is now a force to be reckoned with. Amidst all this commotion, there exists the warrior King Porus, who has taken up the daunting task of measuring swords with the overlord of more than half the world, Alexander. These sequences of events lead to a mouthwatering saga, full of unimaginable twists and turns. This book is an attempt to highlight the era of ancient India, focusing on Porus, his power struggle, and his role in Indian history. This book also presents Alexander in a new light, which should interest the readers. Porus: In the Shadow of Betrayals is the first of a three-part series, covering the early phases in the lives of Porus, Alexander and Chandragupta. Read through to know the twists, turns and intrigue that will prepare the reader for the second part.

So, hope you guys liked my book review of Porus: In the Shadow of Betrayals by Roopesh Tiwari.

Do let me know if you have any other recommendations for me, especially historical fiction. Also, stay tuned with us right here at Booxoul for the best in the field of entertainment, lifestyle, education, fun, finance, fashion, tech and gadgets as well as all things bookish.