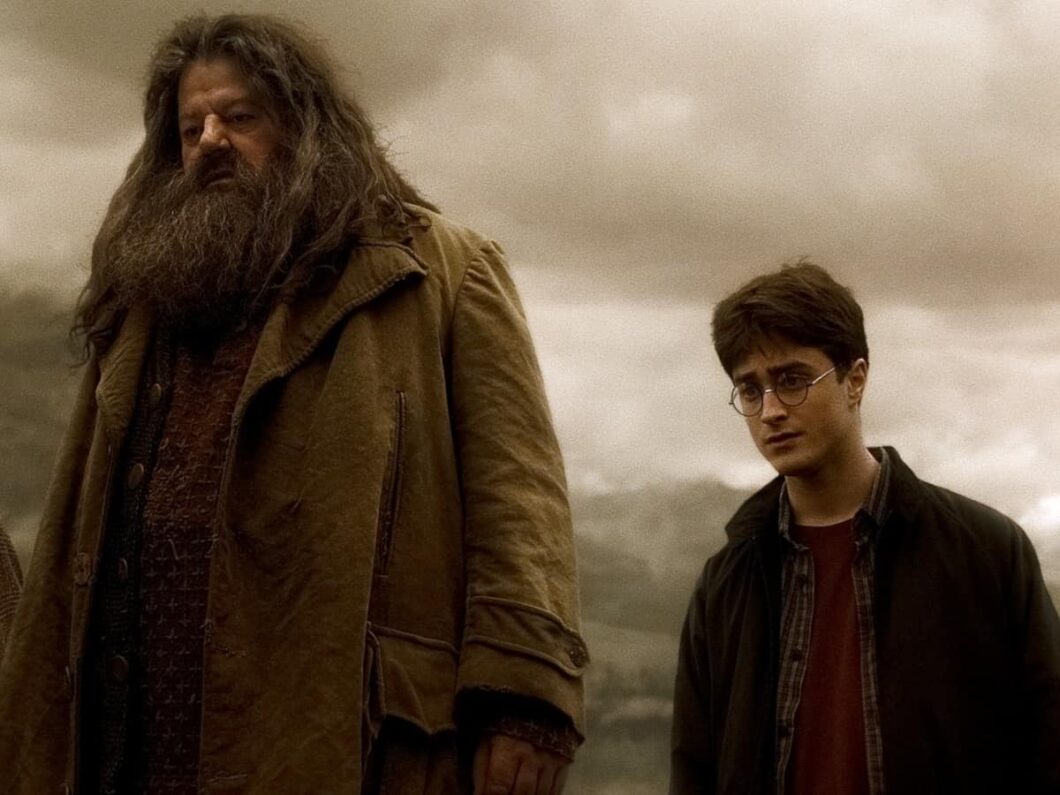 An Ode to Robbie Coltrane AKA Rubeus Hagrid

And after all this time, when one asks who is your favourite character and whose name should I spell out but none other than Hagrid, the keeper of not only keys and grounds at Hogwarts but also the carrier of care, compassion, humility and humanity which have been some of his strengths and which make him far ahead of others in the Wizarding World. A hero, an icon, a champion of commoners, as Robbie Coltrane, who plays the iconic character, passed away last night, here is the end of the era of an iconic character, a man who immortalized one of the most legendary characters of all time – Rubeus Hagrid.

And here, after “All this time” Potterheads are calling out “Accio Hagrid” as well as we lament the loss of Robbie Coltrane, who played and breathed life into the character. He died at the age of 72 last night and seems to have snuffed the light out of not only the character but literally taken away a chunk of the HP universe with him.

You know I always feel and agree with Harry that yes indeed there is no Hogwarts without Hagrid. Not for no reason did Albus Dumbledore trust him, with his life and not only with the keys and game-keeping duties. There is a side of the half-giant which we know and love and respect, which also makes him one of the most loved and adored characters of the Potterverse.

Everyone’s favourite character, if you ask me, in the Potter series has not been Harry or Ron, Hermione or Dumbledore. It was, is and will always remain Hagrid. Not only brings quirkiness and respite to the story, but he also has the notable trait of compassion which makes him the most accessible one to reach out to. Take any instance. Be it his gentle nature with animals (I know he was even caring towards dragons but hey that’s Hagrid, ain’t it?), his lighter approach to life, always being the true picture of humility and kindness, the lovely half-giant has essentially not only been an adoptive parent to Harry but much more.

“I am what I am, an’ I’m not ashamed. ‘Never be ashamed’, my ol’ dad used ter say, there’s some who’ll hold it against you, but they’re not worth botherin’ with.”

Yes, he was not ashamed, no Sir, not this man. Proud of his lineage, the half-giant also strongly advocated and believed in equality for all regardless of their lineage or other traits. Kindness and oneness alongside compassion was his only mantra and I must say that it is also the biggest takeaway I have taken from the series by way of moral ethics. Remember when he met Madam Maxime in the fourth book and was shyly trying to talk to her, giving her details of his family? Was amazingly sweet to see the innocent, timid guy peeping from between his overcoat, the true man, not the half-giant we know, but a guy who considers all-black, white, grey or anything in between on the same page. That’s Hagrid for you, guys. Kind, compassionate, humble and most importantly warm and loving.

In fact, even if 40% of the people who read the series decide to put their feet into his shoes, following compassion and kindness, wouldn’t the world be a much better place to live in?

Robbie Coltrane, who played this character in the Harry Potter films, died last night. I can’t even begin to describe and elaborate on the vibrancy, flamboyance, and sense of closure the actor brought to Hagrid’s character. The twinkling demeanour behind the shaggy beard, the gentleness behind the callous, oversized limbs, the sensitivity behind the humongous torso, he has done it all in such a way that the Hagrid we know and love from the Potterverse is right in front of us, in flesh and blood. This gentle half-giant is the one I’ve always imagined in my head, imagining the actor to be this half-giant, the one I’ve adored since the beginning of the story. For me, he has always represented a solid rock, representing support, compassion, and nothing but pure love and affection for Harry.

He had not only managed to capture Hagrid’s animosity but also recreated the gentle pallor which has been the real sinew of the character. Yes, I can never imagine Hagrid without his face coz for me the two are ditto. That is because Robbie ensured that he played this iconic part so brilliantly that even after ages, people would remember him as Hagrid and not Robbie, reliving that compassionate demeanour as Hagrid’s and not Robbie’s. This I feel, is a true win-win for any actor and he has surely made himself immortal in people’s minds and souls, redeeming his life through this legendary performance. Whilst the actor moved on, the character will live on and in the eternal garb of the actor himself. yes, that is what a true piece of iconography is all about, immortalizing and getting one synonymously with the character.

Whilst fans all over the world are shocked as they mourn his passing, we at Booxoul, being staunch true Potterheads, today want to take a moment to raise our wands to pray for Robbie who was a true personification of Hagrid and pray that he be at eternal peace wherever he is. For me, who has read Harry potter all her life (I must have read it around 40 odd times, each title I mean), he has always given me something to look forward to, each time I have finished reading a title in this series. It’s as if a chunk of the Potterverse decided to dislodge itself, getting lost forever into oblivion last night. The Potterverse can never be the same again for me, with a gaping hole in their form.

And a line comes to me stark clear from the 1st book saying “You think it-wise-to trust Hagrid with something as important as this?”

“I would trust Hagrid with my life,” said Dumbledore.

And so do we. We trust him, hands down with not only our lives but with the world, and the philosophy he has left for us for a better life.

And whilst I sit and brood over this irreparable loss, I pray that he be eternal and forever in our hearts, fondly as I address him as my “Dearest Rubeus Hagrid, Keeper of Keys and castle at Hogwarts..” Until then, leaving you with some of his best quotes and lines:

Ron-“We’re still a bunch of misfits.” Hagrid-“Well, maybe but we’ve all got each other.

I am what I am, an’ I am not ashamed.’ Never be sorry my ol’ dad used ter say. ‘there’s some who’ll hold it against you, but they’re not worth bothering with.’

No good sittin’ worryin’  about it. What’s comin’ will come, an’ we’ll meet it when it does.

There’s a storm coming Harry. And we all best be ready.

Never insult Albus Dumbledore in front of me.

And with this, signing off for today, brooding over the loss of a fabulous actor without whom the character he played, turns into an empty shell for me, disappearing away into oblivion forever.