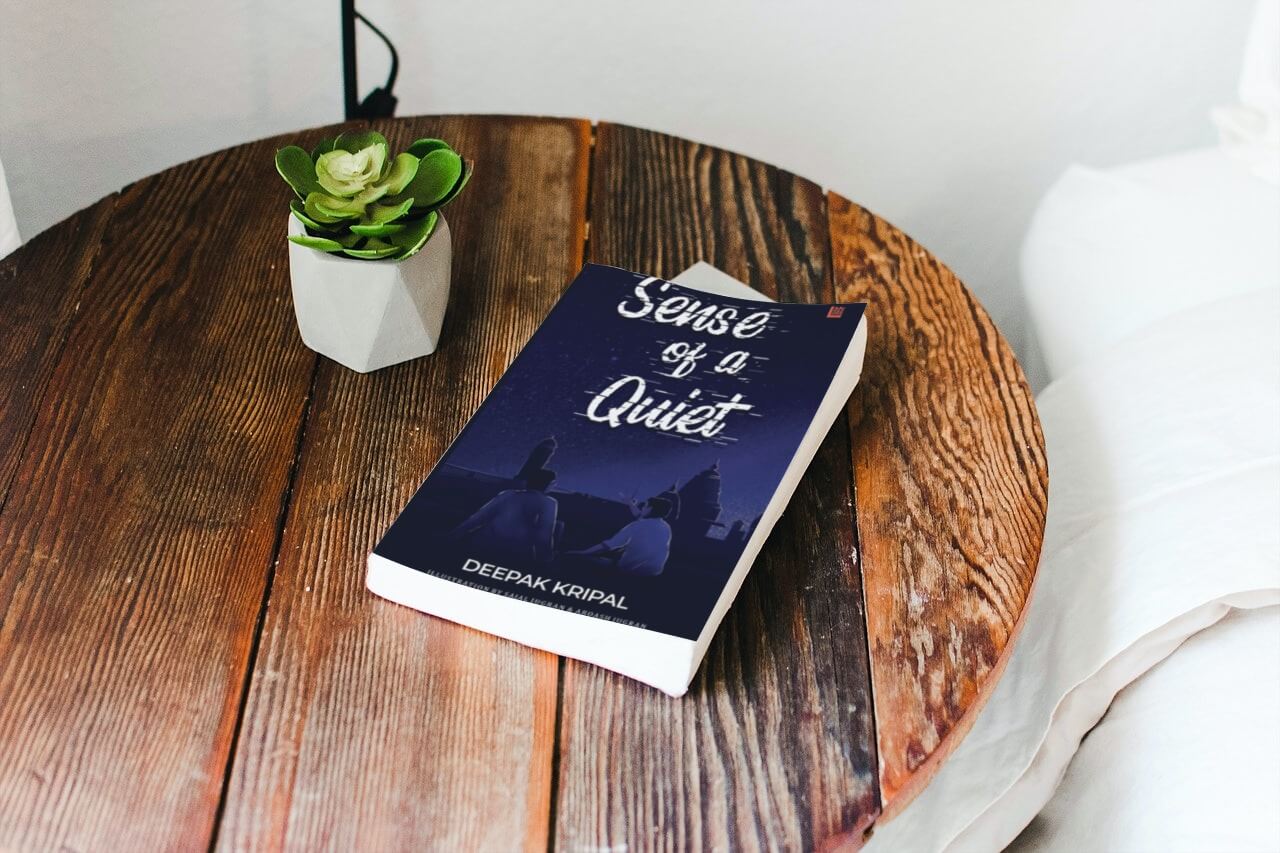 Sense of a Quiet by Deepak Kripal is good contemporary fiction.

It is a tale exploring not only relationship issues but many other aspects such as romance as well as realism. A relatable story with closer-to-life characters, here is a book that you will love to pick up to take a glance into true life…

Sense of a Quiet

Milind and Diya, a doctor couple who settled in Haridwar are struggling with career and relationship issues. Rohan, their common friend from medical college, visits Haridwar to stay with his best friend Milind for a few days. Diya doesn’t like Rohan; she sees him as an impractical and impulsive person who lacks motive in life.

Facing an impending divorce, Rohan wants to rejig his life, to work out the missing pieces and figure out what he really wants from life. In Haridwar, Rohan makes new acquaintances and friends – a rickshaw-wala, a maid and a rude elderly retired army man. Meanwhile, Milind gets trapped in a corruption scam, and Diya finds herself in a situation that she does not want to share with Milind and ends up in a further conflict with Rohan. Rohan gets into an altercation with an MLA’s aide; his stay in Haridwar seems to have set off a chain of events that will turn the relationship between Diya, Rohan and Milind into a quagmire spiralling completely out of control before they know it.

Where will the cycle of life take them to? As they sit on the bank of the Ganges for redemption, what does destiny have in store for them – Scars or Deliverance?

So, I had been toying with the idea of reading a regular, closer-to-life sort of contemporary for a long. Having been full to the brim with multiple genres ranging from sci-fi to mythology to Romcoms and classics, I was looking at a respite in the form of something closer to home. And was I pleasantly surprised by this one which came along the way? Sense of A Quiet by Deepak Kripal is a book which mulls over human relationships whilst also showcasing the tricky aspects of a person’s life. To be honest, I don’t want to categorize the story for once, attributing it to any particular genre or clan coz Deepak here has managed to create something that is all at once relatable as well as closer to real-life which is why I could only begin to comprehend what the characters in this one shall be getting through, having delved into their life and their pain at arm’s length.

The story which revolves around Milind and Diya who are a doctor couple settled in Haridwar highlights how they are struggling with their careers. Things look bleak on the relationship front too, Rohan, who visits them only adds to the misery of getting his own personal baggage of an impending divorce. Diya, for one, does not like Rohan and feels that he is an impractical, impulsive brat who lacks motive in life.

Then, there is Rohan, on the other hand, who is trying to fix the missing pieces of the puzzle in his own life. Making new acquaintances and friends whilst here in Haridwar, he also gets into an altercation with an MLA aide. There, Milind too gets trapped in a corruption scam whilst Diya has her own impending set of troubles. Where will life take these 3 individuals who seem to be at a crossroads so entwined and complex that all they can do is ask for deliverance instead of scars from the Holy Ganges whilst they sit at its banks waiting for their fate to unfurl? Read the book to find out what transpires next.

Whilst the writing style was personally appealing it is the sense of relatability that, for me at least, scores brownie points as far as this book goes. It was as if I could feel the qualms and complexities of their individual struggles, the main characters I mean when I read through this one.

When it comes to especially a challenging career as a doctor I always have felt that they sacrifice quite a bit for the interest of the community they work for at large. Keeping aside their personal trysts and struggles, here is a clan which stops seldom at anything always addressing the needs of others over their own.

Deepak has highlighted such closer-to-life aspects in the narrative ensuring that all the elements in the story confluence together towards forming the perfect read.

Sometimes, certain stories tend to show you the full circle of life. Deepak’s book “Sense of a Quiet” is from that category. It tends to address not only those issues which are at the core and the forefront but also those which are hidden surreptitiously waiting to be perused minutely when called upon. For instance, the relationship ergonomics between Milind and Diya have been displayed brilliantly, making us feel a part of their marital journey and issues too.

The language is brilliant and the narrative outlines life and its multiple trysts and outcomes. What often comes across as reality might not actually be the case always.

The cover design too is done tastefully. Simple yet to the point, this one is aesthetically well presented.

A great read this one is one of Deepak’s very good works.

So, hope you guys liked this review of Sense of a Quiet by Deepak Kripal. Let us know in the comments below which other titles you would like us to read and review. Stay tuned for the best in the field of entertainment, travel, food, fashion, lifestyle and all things bookish.